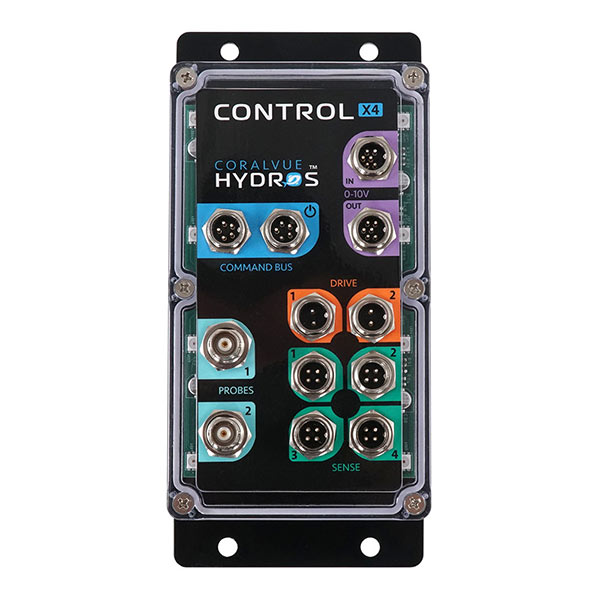 Powerful and robust professional aquarium controller requires no complicated programing to deliver professional results. The sensibly-priced HYDROS Control X4 Aquarium Controller is an extremely user-friendly intelligent aquarium controller capable of monitoring and controlling aquarium water temperature, ORP, pH, alkalinity levels, and so much more. Set up is quick and easy and with 13 different preset configurations, it takes only minutes to get all of your equipment set up and running making it ideal for both beginner and advanced hobbyists! The HYDROS Control X4 Aquarium Controller can be used as a standalone controller for saltwater or freshwater aquariums, or connect multiple HYDROS devices to build an extensive automated aquarium system. Download the HYDROS app and control your HYDROS Control X4 Aquarium Controller from your Internet-connected computer, smartphone, or tablet. Durable construction with aircraft-style connectors and IP65 rating ensure durable, long-lasting use even near harsh marine aquarium environments.

HYDROS Sense Port
The Sense Port is a new concept in aquarium parameter measurement. HYDROS devices include several Sense Ports. A Sense Port is a generic input port that can accept data from numerous different types of aquarium sensors.

HYDROS Drive Port
The Drive Ports provide switched 12V DC power for running small lights, motors, pumps, fans, and other aquarium accessories. The exact current being supplied by each port is continuously monitored by the Control, so if a motor or pump quits drawing current or draws too much, you will be immediately notified.

HYDROS Probe Port
The Probe Port is the one of the most remarkable ports on the HYDROS Control X4. You can connect an ORP or a pH probe to the Probe Port but, this is no ordinary pH input! The circuitry is based on an ultra-high-quality input chip specifically designed for these types of probes. Each pH input provides digital galvanic isolation from the rest of the system. Galvanic isolation prevents interference with other accessories connected to the system like motors and pumps. Digital Galvanic isolation preserves the accuracy of the measurement by converting the signal to a digital domain before crossing the isolation threshold.

HYDROS 0-10V Port
The HYDROS Control X4 has 0-10V I/O (input and output) ports that allow it to control and receive commands from other HYDROS devices and accessories from other brands. A legacy automation system can provide input via the 0-10V Ports. They can control variable speed pumps and can also be used to monitor simple switch closures, like push buttons or float switches.