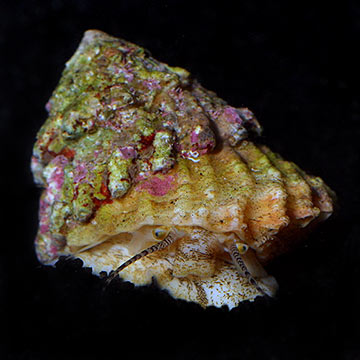 The Astraea Turbo Snail has an attractive shell and a ravenous appetite for algae. Unlike many bottom dwellers that are dressed in drab colors to better camouflage themselves against the sand bottoms, Astraea tecta boasts a pyramid-shape shell with beautiful, olive green coloration. Since some individuals have projections on the shell that give it a star-like outline, the Astraea Turbo is also known as the Astraea Star Snail or Astraea Conehead Snail.

Though interesting to observe in your home aquarium, the Astraea Turbo Snail serves a greater function of cleaning algae-covered live rock. It is very adept at keeping your aquarium clean. In fact, this small herbivore prefers to feed on nuisance hair algae, as well as cyanobacteria and diatoms. Some aquarists also report that the Astraea Turbo Snail actually consumes the entire hair algae structure, which helps prevent immediate further algae growth.

The Astraea Turbo Snail prefers well-established aquariums with ample hiding places and sufficient room to roam. In addition to eating algae off of your live rock, this member of the Astraeinae family will also clean your aquarium glass. However, the Astraea Turbo Snail is not known to be climbers like other smaller-shelled snail species. Care needs to be taken to observe the daily activities of this hungry snail since it has difficulty righting itself if it falls or is knocked upside down.

Like other invertebrates, the Astraea Turbo Snail is sensitive to high nitrate levels and will not tolerate copper-based medications. The Astraea Turbo Snail requires gradual acclimation preferably utilizing the drip acclimation method over the course of several hours, since it cannot tolerate even minute changes in water parameters. If sufficient food levels are not present, supplement the diet with blanched spinach or lettuce and vegetable-based tablet foods.

These snails are great at cleaning live-rock and the tank glass. They eat all of the hair algae until it is gone, not just down to the base.
Bekah R Waterloo , IA
These guys are great with a tank stocked full of live rock! I put a few from my 90 gallon reef tank into my smaller 6 gallon Nano-Cube that had a hair algae problem a week ago and they've mowed down 3/4 of my tank already. And NONE of it is growing back!
Jonathan D Milwaukee , WI
I bought 10 of these for my 75 gallon tank due to a horrible hair algae problem. They have already cleaned off the glass and are working on the live rock. These snails are very active and will keep your tank clean of algae!
Sherry K Hillsdale , WY
I have had to flip these snails over a few times, because the crabs occasionally knock them off the rock. However, most of them are big enough to hold fast to the live rock and not let the crabs bully them. They are excellent for cleaning algae film from the glass. I have zero hair algae at this time, thanks to about 30 of these snails and their cleaner companions.
Eric P Kempner , TX
Arguably the best addition for maintaining algae growth in the aquarium. Fast and voracious eaters that work day and night. I would not maintain any reef system without having these to control algae growth.
J Wedel Bradenton , FL
If these snails are knocked off the rocks and land upside down, they will right themselves after the tank gets dark. Apparently they get picked on during the lighted period by many fish and invertebrates.
1-6 of 6 testimonials