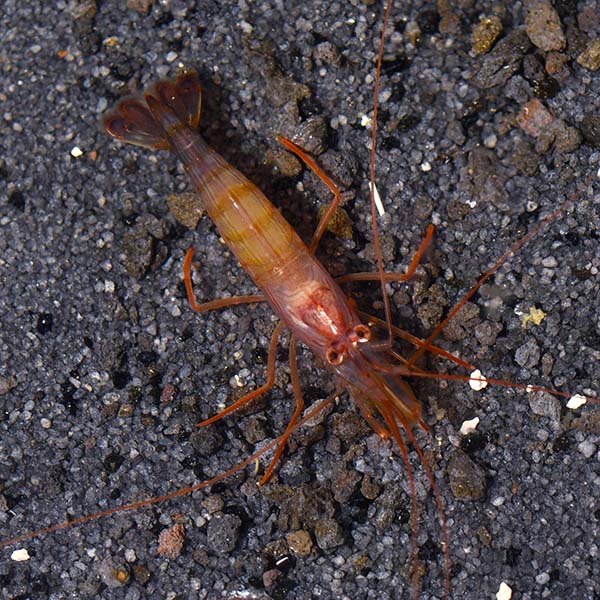 The Peppermint Shrimp is best known for its natural ability to manage nuisance Aiptasia, or glass anemones. Keep in mind that some individual Peppermint Shrimp are better at managing aiptasia while others may not be interested in aiptasia at all. Though considered part of the "cleaner" grouping of shrimp, Lysmata wurdemanni is more of a scavenger. The Peppermint Shrimp picks its way around your aquarium and live rock to consume detritus, uneaten food, and decomposing organic material. This ornamental member of the Hippolytidae family is brightly colored with a clear or creamy white body striped with several thin and distinct longitudinal red bands.

Also known as the Veined or Caribbean Cleaner Shrimp, the Peppermint Shrimp is sometimes confused with its Pacific cousin, Rhynchocinetes durbanensis. However, that shrimp has a pointed nose and inter-spaced white stripes over its body. In the wild, Peppermint Shrimp are usually found in the vertical shafts of the reef. Some even take up residence in the core of pipe sponges. The Peppermint Shrimp does best in home aquariums with live rock, ample places to hide, as well as open areas to scavenge.

Peppermint Shrimp are very social and peaceful towards most reef inhabitants. Like other invertebrates, the Peppermint Shrimp cannot tolerate copper-based medications or high nitrate levels. It also requires supplemental iodine to encourage proper molting of its carapace. In addition to what it obtains from scavenging, the diet of the Peppermint Shrimp should consist of most types of prepared foods and the occasional pieces of fresh fish.

The Peppermint Shrimp has been successfully bred by commercial fish farms, and can be bred in the home aquarium. Rearing the larvae requires specialized feeds and care outside of the display aquarium.

The Western Atlantic Peppermint Shrimp complex Lysmata wurdemanni has been reclassified in 2006 by Andrew L. Rhyne and Junda Lin based on their morphology and color pattern. In general, peppermint shrimp from different regions can easily be identified to species level by their color patterns. Our peppermint shrimp are from either the Florida Keys or the Gulf of Mexico and are most often Lysmata boggessi, a species proven to consume Aiptaisa (Rhyne et al. 2004). We occasionally receive other species from the Lysmata wurdemanni complex. We have consulted with Dr. Rhyne and he has confirmed that all species of peppermint shrimp he has tested in the laboratory consume Aiptasia. Differences in exact collection location often dictates what species we have in stock. The exact species that will be shipped to your door is one of the following listed below. The exact species you receive will vary based on the time of year, weather conditions, freight space, and inventory levels. All of the following species make ideal scavengers and prey on the pest anemone Aiptasia pallida.

Write a Testimonial | Ask Customer Service
Karla J Lidgerwood , ND
Peppermint Shrimp work very well to help eliminate aiptasia. I tried other things first, but adding these shrimp to my tank was the easiest and most successful solution by far.
Nick H Memphis , TN
My Peppermint Shrimp doesn't like the light much. He dug out a cave under my live rock and spends most of his time there with one of his antennae sticking out. Great little guy - he even eats from my hand.
John F Longmont , CO
Great for aiptasia removal, and lots of fun to watch. They'll eat almost anything. Readily spawn in my reef tank - 4 of my 5 are carrying eggs now. The larvae make great food for the reef.
Matthew L Wabash , IN
I have one of these little guys. He hides during the day, but as soon as that moon light comes on, he's out and about. He absolutely LOVES pieces of frozen shrimp.
Mary A Tulalip , WA
We have a 14 gal. Nano reef and we were having an aiptasia crisis. Our local reef store said they didn't have much luck with the these shrimp so we kept waiting for Berghia to become available (no luck). I finally ordered one of these a few days ago out of desperation. I woke up this morning to ZERO aiptasia!!! I must have got a really good one... The quality of all your LiveAcquaria was amazing! Thank you!
Sherry K Hillsdale , WY
We have six of these, purchased as soon as the nitrites cleared in the tank to eat the rock anemones that had sprouted on the live rock. They really do eat aiptasia and now that it's gone, they still find plenty to eat and are doing fine. Also they are very pretty little shrimp that seem to enjoy watching us as much as we watch them. Definitely have rocks if you want to keep these shrimp. They like to dance in and out of the rocks.
Mark H Lake Havasu City , AZ
A really great addition to my tank, I got 3 of them. Active little creatures at night watching them swim about in search of food and them just doing their thing. Really peaceful guys, I also got mine eating from my hand.
Brandon A Dubuque , IA
Was very effective likewise quick - Ordered 3 for a 29 gallon reef tank w/ 10 gallon sump - put the 2 small peppermints in the MT with a scarlet cleaner shrimp ( no hostility ) & 1 large peppermint shrimp in the sump. The Aiptasia has been cleared majorly from the sump refugiums multichambers & the 2 little guys uptop have started making noticeable progress. Great buy - prices blow away Berghia nudibranchs
Scott E IL
LiveAquaria is the best in Marine my Peppermint Shrimps arrived well, drip acclimated 2 hours and doing fine.Very good packaging fast s.h. Thanks
Brad P Seattle , WA
Be careful with these. Once they run out of food, they'll start picking on hammer corals and frogspawn. I have a hammer graveryard because of them.
Jarod Hoover Weatherford , TX
I loved these little guys at first. I had 5 in a 100 gallon reef once they got comfortable in my tank and were more active they attacked my frogspawn coral and punctured and ate the healthy 90 dollar coral. They even had plenty of food as i am a heavy feeder. These are definitely not reef safe!
Eddie S Randolph , VT
Great addition to my clean-up crew only comes out at night. I haven't seen it at all during the day but I expected that.
1-12 of 12 testimonials