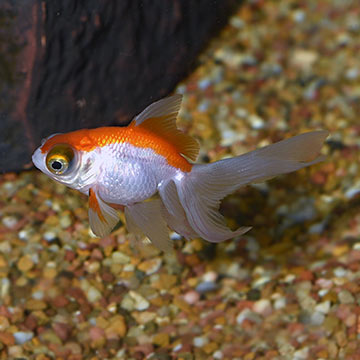 When first hatched, the Telescope Goldfish has normal eyes that begin to bulge after about one month. It may take up to three months for the eyes to fully develop the protruding bulge that is so characteristic of this goldfish. The selection of a good specimen places much importance on the eyes. They should be large, protruding, and symmetrical.

The Celestial Eye is a unique example of the Telescope Goldfish that first appeared in 1870. A fine specimen should have large, symmetrical and bulged eyes, with the pupils lying horizontally and pointing upwards. Another feature worthy of note that is unique to this fish is the absence of a dorsal fin.

All goldfish are members of the carp group and are generally quite hardy. The Telescope Goldfish will do well in a 30 gallon or larger tank with a fine gravel bottom and hardy, cold water plants. Goldfish are diggers and will scatter the fine sand onto leaves, injuring thin and less hardy plants. Roots and well-rounded river rocks are a good addition to the aquarium.

Goldfish are omnivorous and will eat all types of dried and live foods. Limit protein, however, to 30% of the diet. A Goldfish flake or pellet food will provide these fish with the proper nutrition.