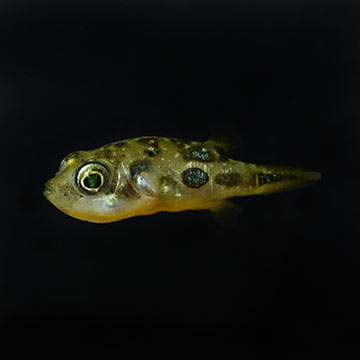 The Indian Dwarf Puffer is also known as the Pea, Bumblebee, Malabar, or Pygmy Puffer. This puffer is much smaller than other puffers in the same family, as it only reaches a maximum length of 1 inch. It is golden-brown on the back which fades to an off white on the belly. Dark brown to black spots covers most of this fish. The male of this species is leaner, with less of a round shape when compared to the female. Also, the male has a pronounced black stripe running from the tail to the pectoral fin.

The ideal set up for the Indian Dwarf Puffer is a planted aquarium of at least 30 gallons with plenty of hiding places. Unlike the other puffers in this family, the Indian Dwarf requires freshwater with no salt content. The males are very territorial and only one per aquarium is suggested unless it is a large system.

The Indian Dwarf Puffer should be fed crustacean foods such as brine shrimp, krill, mollusks and earthworms.

I have four Indian Dwarf Puffers in my semi-planted 20-gallon long tank, with four Black Skirt Tetras. The puffers are the coolest fish. They swim in a unique way, and they are NOT aggressive (of course, mine are all females). I added three Otocinclus Catfish to eat tank algae, and the Dwarf Puffers watch them eat, but do not bother them at all. I also added a Bumblebee Goby (because he needed a home). The goby may be a bad idea, though; he is very aggressive, and I worry that he will nip the puffers' fins (I saw him chase the otos and the puffers). The tetras are much larger than the puffers and are also quite aggressive. But the puffers WILL stand their ground when confronted. After a second, the tetras always back down.
Phil Mucha Pasco , WA
I maintain a dozen of these puffers in a tank with four Peruvian Puffers (assellus). There are a few spats between the Dwarf Puffers which appear to be only chases with no actual contact. The dwarves and peruvians ignore each other. My tank also houses Guppies and Corys with no nicks in their fins. They eat blood/black worms enthusiastically. They will casually feed on mussel and snails. They are perfect and thoroughly interesting fish for the small aquarium.
Michelle G. Syracuse , NY
These puffers are strictly freshwater, and generally should not be mixed with any other puffer species unless you have a lot of experience. Most puffers turn on each other and tank mates, it just takes time for the fish to mature. Heavily planted tanks are recommended for any freshwater puffer species, as it will allow other puffers and non-puffer tank mates areas to hide. Be sure to feed lots of snails to prevent their beaks from growing too long.
Maurice Dittz Simpsonville , KY
My Puffer is awesome!
1-4 of 4 testimonials