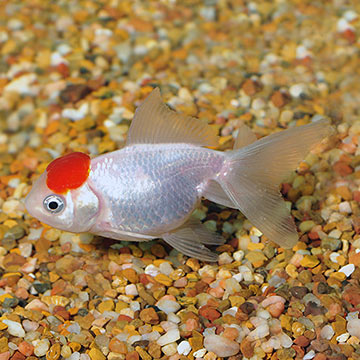 The Red Cap Oranda is one of several varieties of what is commonly known as the Goldfish, Carassius auratus auratus. The Goldfish originally came from parts of Asia, Japan, and China but now enjoys worldwide distribution due to controlled breeding programs. The Red Cap Oranda is typically a metallic-scaled fish. Resembling the Veil Tail varieties, the Oranda's distinction is in the "hood" that covers its head. In the case of the Red Cap Oranda, this hood is a predominant, bright red, while the body is an iridescent white.

All goldfish are members of the carp group and are generally quite hardy. The Red Cap Oranda will do well in a tank of 30 gallons of water or more with a fine gravel bottom and hardy, cold water plants, as well as backyard garden ponds of 180 gallons or more. Goldfish are diggers and will scatter the fine sand onto leaves, injuring thin and less hardy plants. Roots and well-rounded river rocks are appreciated.

Goldfish are omnivorous, and will eat all types of dried and live foods. Limit protein, however, to 30% of the diet. A Goldfish flake or pellet food will provide these fish with the proper nutrition.

Write a Testimonial | Ask Customer Service
Amelia S Tamarac , FL
I have two cappies...they are so beautiful. Their fins are long, flowing, and flawless. They terrorize my plants a little bit, but they are a treat. I have them in a tank with a variety of fish, one of them semi-aggressive, and the cappies seem to hold their own. They are just very nice fish with voracious appetites!
Patricia B New Market , MD
I have enjoyed raising Red-Cap Orandas for about a year and I have found a solution to one of their problems. These fish are prone to intestinal and buoyancy problems. I have found that feeding them chopped green peas with the skin removed helps to keep them "regular." I can hand feed mine - they love to be handled. For the buoyancy problems, they will totally exhaust themselves trying to stay upright; sometimes they uncontrollably float to the top, to the bottom, or capsize. I cut the top and bottom off of a small plastic water bottle, smoothed the edges out as much as possible (they can be pretty sharp, but we haven't had any injuries yet), and laid it in the bottom of their tank and purged out any bubbles. My brilliant fish figured out that if they go in their "room" they can rest without floating up to the top and out of control. They have both tried to fit inside at once. This is also good for when their dorsal fin dries out from having to sleep at the top. I make no claims, except that it has worked for us.
Ann Wever Sonora , CA
Just got my fish today. BEAUTIFUL! so happy. Will buy all my online fish thru Liveaquaria.com
1-3 of 3 testimonials