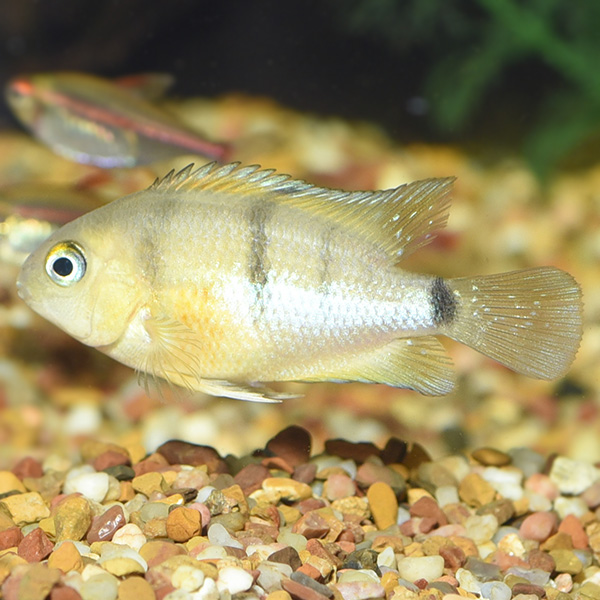 The Cutter’s Cichlid (Cryptoheros cutteri), is a freshwater fish that has an iridescent yellow body with black vertical stripes with differing levels of intensity running along its body. Because of its semi-aggressive temperament, caregivers should have some experience keeping these types of fish. This tropical freshwater fish can display aggression toward smaller fish, so keep them in a tank with other larger fish with similar temperament. To help ease aggression, provide plenty of room to swim and have many hiding places in which fish can establish territories.

In nature, the Cutter’s Cichlid is found in freshwater subtropical waters where they live on the sea floor. A smaller fish growing to a maximum length of 5”, they are at home in freshwater tanks of 30 gallons or more with temperatures in the 75°-80°F range with pH levels between 7.0-7.5. Cutter’s Cichlids are open breeders that need well-oxygenated water. They spawn on cleaned rocks where the fry are suspended from stones and guarded by both parents. Cichlids parents may eat their spawn, however.

Cutter’s Cichlids are omnivorous and will eat most prepared and frozen foods, including freeze-dried bloodworms, tubifex, and ocean plankton, as well as flake food and Cichlid pellets.