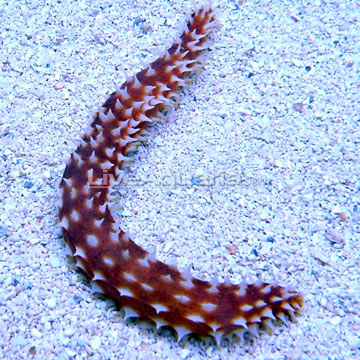 The Tiger Tail Sea Cucumber is one of nature's more exotic detritus eaters. With its brown body spotted with white and dressed in numerous spiny papillae, Holothuria sp. is also a visually stunning addition to the home aquarium. Since it is a very adept and agile scavenger, the Tiger Tail Sea Cucumber can clean detritus from beneath rockwork and difficult-to-clean tight corners.

Native to the oceans of the Indo-Pacific, this member of the Holothuriidae family can grow to impressive lengths of up to six feet long in the wild. In the home aquarium, however, most max out in length between 12" and 18" long. In general, keep only 3 inches of worm for every 20 gallons of aquarium water.

Due to seasonable availability, orders will be filled with one of two Holothuria species. Holothuria hilla has a gray to chestnut-brown body, while Holothuria impatiens has a knobier appearance and is more pale in color.

Write a Testimonial | Ask Customer Service
Jeff Vandenbush Green Bay , WV
I have two 4" long Sea Cucumbers. They are excellent scavengers in my seahorse/reef tank. They do well even though the only substrate I have is crumbled live rock pieces on the glass bottom.
Tracy H Dallas , TX
I have a 12" long tiger tail in my 54 gal aquarium with a 4 inch sand bed. He is perfect for keeping my sand clean in my reef. I have nicknamed him "Tremors" If you get one make sure your over flow vent is screened as the first day I had mine it oozed through the vents into the sump.
1-2 of 2 testimonials