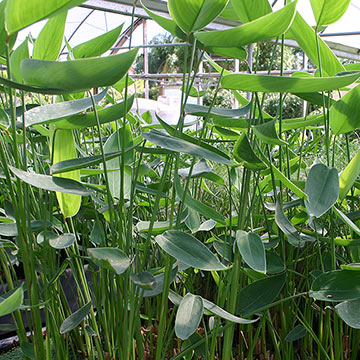 Thalia dealbata, also known as Hardy Water Canna, is a must-have plant for water gardeners wanting an eye-catching plant as a focal point. This gorgeous plant has many attractive features to delight any plant lover. The most evident is the commanding stature of this stately plant. Its long elegant stalks and elongated paddle-like leaves accentuate the sleek vertical growing habit of this highly architectural plant.

Though very exotic and tropical in appearance, Thalia dealbata is surprisingly a hardy perennial able to endure mild winters as long as its roots are protected from freezing. To overwinter, simply submerge it into deeper water as you would overwinter hardy Water Lilies. In addition, Thalia dealbata produces beautiful purple inflorescence in late summer for a full complement of visual delights.

Thalia dealbata is a regionally hardy marginal plant native to the swamps, ponds, and wetlands of southern and central United States with the south-west tip of Illinois being the northern most range of the plant. Thalia dealbata, is also known as Powdery Thalia or Powdery Alligator-Flag due to the powdery, water-repellant coating that gives it a lovely dusky appearance. While seemingly monochromatic in appearance, Thalia dealbata imparts a symphony of greens as the play of light and shadow throughout the day highlights shades ranging from deep blue-green in low light to bright lime green in high light conditions.

For best growth, locate Thalia dealbata in full sun to partial shade. For use in your water garden, plant in a one-gallon container and submerge the pot 2" below the pond water surface, but no deeper than 6” during the growing season. Be sure to divide and repot your plant after each growing season to prevent overcrowding. Zones 5-11.