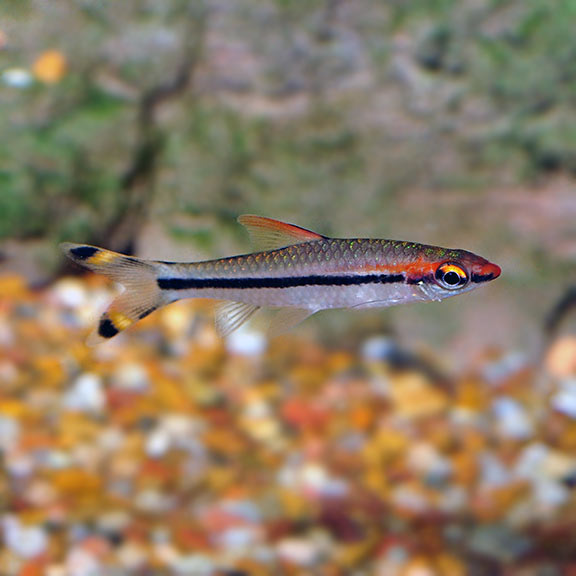 The Denison Barb, also known as the Red Lined Torpedo Barb or the Rose Line Shark, is a longer fish when compared to the other barbs. The coloration of this fish is silver in color with a black line running the length of its body and a red stripe across its eyes. It also has a red edge on its dorsal fin and yellow and black accents on the end of its tail.

Unlike some of the other barbs, this is a peaceful fish that is a welcome addition to any larger community aquarium. They should be kept in groups in an aquarium with a tight fitting lid, as they have a tendency to jump. In nature, they are found in fast moving streams and appreciate a high oxygen level in aquarium water.

The Denison Barb needs to be fed a variety of foods including vegetables as well as meaty foods. Feed a quality flake food as well as live and frozen foods such as brine shrimp and bloodworms.

Write a Testimonial | Ask Customer Service
Jacob L San Antonio , UT
I was told by a local tropical fish store employee that if I ever came across this fish to buy it, as they are very hard to find. I bought two from liveaquaria.com and couldn't be happier with my purchase! They arrived on time and were much larger and healthier than I would have expected due to my experience at local pet shops. Great fish, highly recommended!
Coree C Milwaukee , WI
I have found this barb to be a real schoolers. They are curious and very fast. From what I can see, judging from Wisconsin diverse tempertures, these fish are very hardy. The ones I have are handling extreme temptures in stride. They can be like other barbs nasty little tail nibbers. They are much faster then my laterial barbs. These like to school, unlike the franatic schooling habits of other barbs these will glide across the length of the tank in stride. My tank is a 200 gallon, and has been up for 6 years, with a community of medium aggressive fish. All my barbs are getting large, and I am look for more unusual barbs to fill my tank.
Kevin K Woodland Hills , CA
These are cool fish! They are fast and they are big. I have a 20 gallon tank and mine is already outgrowing my tank!
Virginia V Austin , TX
These are currently my favorite fish. I actually got them at a big box store, and they don't look like much when you first get them. But once they settle in and grow some they have beautiful colors. I have 5 in a 125 gal. tank and they're now at least 4". Tank should have a lid, sometimes they startle if I walk past the tank after lights off. 1 of them jumped out once, but I was able to save it.
1-4 of 4 testimonials