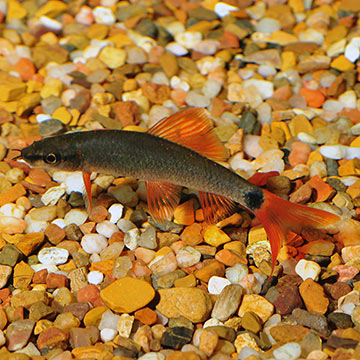 The Rainbow Shark, also known as the Ruby Shark or Red-Finned Shark, is great for the semi-aggressive community aquarium, as long as they are the sole shark and the other tankmates are of similar size. The Rainbow Shark is a beautifully colored fish which is a dark gray to black with red fins.

It requires a large aquarium with driftwood, rocks, and spots of dense vegetation. This shark may set up territories around the aquarium. The Rainbow Shark will become very aggressive towards its own species.

Unfortunately, the breeding habits of the Rainbow Shark have not been documented.

An omnivore, the Rainbow Shark is not a particularly finicky eater. Flake food, freeze-dried bloodworms and tubifex, as well as vegetable-based foods should be fed.

Write a Testimonial | Ask Customer Service
Don L Suffern , NY
Moderately agressive. Territorial. Hasn't hurt any other fish. Spends most of its time in a ceramic house. Darts out when other fish are too close. Wreaks havoc in a near-by cave during meal time. Chases all species, all sizes. Favorite food spirulina tablets. Lives a long time.
Andrew J Wheelersburg , OH
I have had this species in my 55 gallon aquarium for about 2 years now and it is an awesome fish. He doesn't really bother the other fish (neon tetras, barbs, red eyes, and silver dollars). One thing I do have to say about this fish is that they ate all of our plants so I would tell you to get fake plants. I named mine "Waldo" because he hides and we always have to try and find him like the "Where's Waldo" books.
Chris S Old Greenwich , CT


I recently introduced two small (2 inch) Rainbow Sharks to my desk aquarium. Within a day, one was not in good shape because of stress from the aggressive behavior of the other one. The tank was far too small for both of them. I'd recommend making sure that there is enough room for them to claim territories if you intend to add more than one Rainbow Shark to your aquarium. Other than that, they are beautiful fish and they add a lot of color and activity to my tank! I highly recommend them!
Cooper N Fairport , NY
My Rainbow Shark swims everywhere in the tank it doesn't seem to have any certain territory. He usually swims around the tank eating algae and discovering new hiding spots in the driftwood I didn't even know about! He doesn't hurt any of my Barbs unless they nip him and he has never eaten my plants, just algae. This shark is a lot of fun to watch and a great addition to a semi-aggressive tank.
Will M Bristow , VA
I would not recommend these fish to beginners as my pair killed two of my bala sharks, four of my tiger barbs, and two of my columbian sharks. I gave them to a friend and now they havn't bothered his larger tinfoil barbs.
Tanner G Tampa , FL
I love my rainbow shark! I have him in a 55 gallon semi-aggressive tank and he is actually very peacful. Always out and exploring the tank. This picture does not show the true color of the fish.
Dillon F Tampa , FL
Have my Rainbow in a tank with 5 Barbs (tiger, green tiger, albino tiger) he chases them around occasionally but as i bought them about the same time, they are similar in size and so really don't bother each other too much. None have died and the rainbow seems to have his little spot in a cave staked out unless they come too close. Very entertaining fish however!
Paul Wofford Nampa , ID
My shark will chase any fish that gets close to him, but only a short distance. He doesn't try to hunt fish down, or try to kill them. He will even take on my ram or angel, but only when they get to close, and it only lasts a second while the ram and angel flee. The one fish that the rainbow loves to hang out with is my yoyo loach. They are best friends and they seek each other out.
1-8 of 8 testimonials