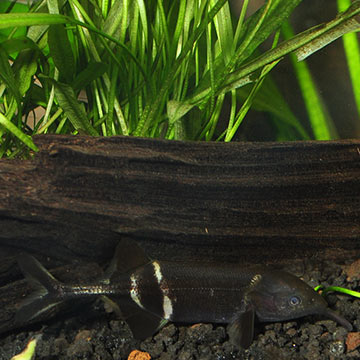 The Elephant Nose is an interesting fish that originates from the Niger River and its tributaries in Western Africa. Its body is mostly black and is irregularly shaped with a long narrow tail and what looks to be its nose however this is actually an extension of the fish's mouth. The Elephant nose uses its trunk-like extension to forage for food, communicate, move through the water and self defense. It possesses a weak electrical organ at the caudal peduncles which is used to locate food.

It requires a minimum of a 50 gallon aquarium with good water conditions. It is generally timid and reclusive, preferring a fine-gravel-bottom aquarium with plenty of plants and rocks for hiding places where it can find refuge from the light. To better appreciate this fish, many hobbyists will purchase a "ghost tube," a clear plastic tube that facilitates viewing during the day. Once accustomed to its surroundings, the Elephant Nose can become incredibly tame and trusting to the point of being hand-held. It does well with other, larger species of a peaceful nature, but may be aggressive towards those of similar or smaller size.

The Elephant Nose is carnivorous and will eat many types of meaty foods including; blood worms, chopped earthworms, brine shrimp, flake and pellet foods as well as an array of frozen meaty foods.

Write a Testimonial | Ask Customer Service
Caro R Jacksonville , FL
In my experience Elephant Fish will often try to jump and end up out of the fishtank. One of mine got out through the opening where the filter goes.
Jim O Mentor , OH
Very reclusive fish. Seems to have a very good temperment when visible. Difficult to feed in community tank. Not a good idea, keep them separate from semi-aggressive tropical community fish. I pretty much have to hand feed E-nose blood worms daily.
Nick H Beckley , WV
I have a small one. Seems to hide from me whenever I enter the room. Otherwise, a few times that it has come out, it swims around following the other fish. Very interesting.
Jerry R Longview , WA
A very interesting fish to say the least. real nasty to others of its own kind. I separated them, I thought they were going to kill each other.
Tracy Pursell Lindstrom , MN
I was told to make a box out of plastic cross stitch grid that can be opened & closed and is weighted down. I drop a cube of frozen blood worms in it and drop it in the tank. The minute it hits the water, the elephant nose comes flying in to poke it and work out the worms
1-5 of 5 testimonials