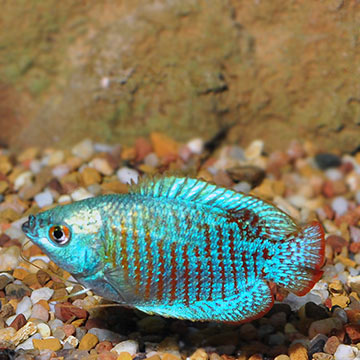 Neon Blue Dwarf Gouramis do best in a tank that is 10 gallons or larger. The aquarium should be heavily planted and have at least part of the surface covered with floating plants. A darker substrate will help show-off the gourami's colors, and peat filtration is recommended. Regular water changes are a must, as this gourami can be susceptible to disease. They should not be kept with large, aggressive fish, but would enjoy the company of other small, peaceful fish as well as fellow gouramis. Loud noises often scare them, so the tank should be in a quiet area.

The Neon Blue Dwarf Gourami is a bubble nest builder that uses plants to help bind together the bubbles. Besides the difference in color, the sex can be determined by the dorsal fin. The male's dorsal fin is pointed, the female's is rounded. The water level should be reduced to 8 inches during spawning, and the temperature should be approximately 82°F. After spawning the female should be moved to a different tank. The male will tend to the eggs and fry, and when the fry are 2-3 days old the male should also be removed. When first hatched, the fry should be fed infusoria, and later, brine shrimp and finely ground flakes. Freeze-dried tablets may also be fed to older fry.

The Neon Blue Dwarf Gouramis are an omnivore and prefers both algae-based foods as well as meaty foods. An algae-based flake food, along with freeze-dried bloodworms, tubifex, and brine shrimp will provide these fish with the proper nutrition.

Write a Testimonial | Ask Customer Service
Robert & Jeanne B Ames , IA
We love gouramis and the blue dwarf is absolutely a beautiful addition to any community tank. We have gouramis of various colors and are very pleased with everyone of them.
John D Sonora , CA
Not as hardy as the larger gouramis, mine required some extra care. They were aggressive at first, but as they adapted to their new tank they calmed down. A very personable little fish.
S. Corber Bronx , NY
My Neon Blue Dwarf Gouramis are beautiful, graceful fish that are also the gems of my tank. Their faces are almost human and show high intelligence. I have one shy one, and one that is unafraid, coming right up to the glass or to a finger with bloodworms. I have seen nothing but gentleness with the other tankmates.
Zach S Edison , NJ
I recently bought one for my new 20 gal tank. It gets along well with my angelfish, my 3 zebra danios,my 3 swordtails and my two badis. Beautiful fish for any aquarium, but very shy at first.
1-4 of 4 testimonials