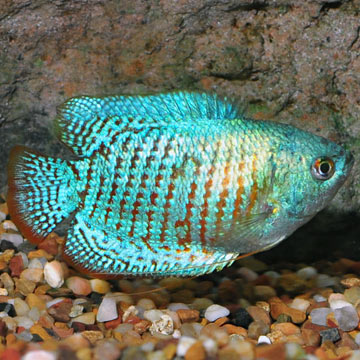 Powder Blue Dwarf Gouramis require a tank that is 10 gallons or larger. The aquarium should be heavily planted and have at least part of the surface covered with floating plants. A darker substrate will help show-off the gourami's colors, and peat filtration is recommended. Regular water changes are a must, as this gourami can be susceptible to disease. They should not be kept with large, aggressive fish, but are compatible with other small, peaceful fish as well as fellow gouramis. Loud noises often scare them, so the tank should be in a quiet area.

The Powder Blue Dwarf Gourami is a bubble nest builder that uses plants to help bind together the bubbles. Besides the difference in color, the sex can be determined by the dorsal fin. The male's dorsal fin is pointed the female's is rounded. The water level should be reduced to 8 inches during spawning, and the temperature should be approximately 82°F. After spawning, the female should be moved to a different tank. The male will tend to the eggs and fry, and when the fry are 2-3 days old the male should also be removed. When first hatched, the fry should be fed infusoria, and later, brine shrimp and finely ground flakes. Freeze-dried tablets may also be fed to older fry.

The Powder Blue Dwarf Gourami is an omnivore and prefers both algae-based foods as well as meaty foods. An algae-based flake food, along with freeze-dried bloodworms, tubifex, and brine shrimp will provide these fish with the proper nutrition.

This fish is very durable. I really recommend this fish to those who want a long-lasting fish.
Chris S City not selected , NJ
This fish does not get the credit they deserve from this picture. Ones that have adapted to the tank look more like the Neon Blue Dwarfs. In a well-planted aquarium, they will thrive. Also, I find in my tank they take a real liking to live plants. Cardinal Tetras and Cory's are great tankmates. They can make a community tank look spectacular(and all you have to do is regular water change and filtering).
John B Tampa
This is not my favorite fish in terms of esthetics. But he is vibrant in color and they sure are great fish to have in a community tank. These fish tend to be on the shy side. I ordered one of these with a pair of peacock Gudgeons, a flame dwarf Gourami, three sparkling Gourami, two catfish, and a German Blue Ram. I must say, my powder blue is the most entertaining fish of my bunch. He's super skittish, especially when I open the tank lid. But, he loves to people watch and cat watch. He will swim up to my cats, and freak out when they paw at the glass, he'll quickly swim away, but comes right back for more! He plays with one of my Peacock Gudgeons and will occasionally pal around with him. He also plays with the other fish's food. I use algae wafers for the cat fish, and he'll wreck them across the bottom of the tank. He'll shred the tubifex worms I feed the peacocks. And he'll attack my live plants! He really is a trip to watch! Mine also hangs out in the currents throughout the day, but rests in the back of the tank, out of any currents at night or when (I'm guessing) he's tried. He definitely enjoys being watched and seeing me. And he can swim very fast and hide within the blink of an eye! I highly recommend the powder blue in a peaceful, community tank. He's entertaining, not too shy, but is skittish. All of which makes for a quirky addition to your tank! If you're thinking about one, buy one!
1-3 of 3 testimonials