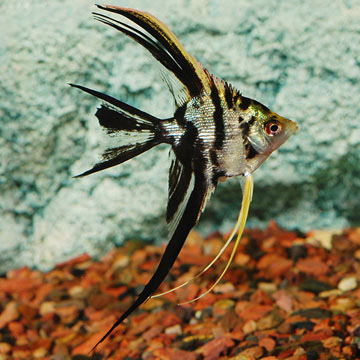 The Marble Veil Angel is a strain of angelfish that has a black, white, and yellow marbled pattern. The fins are long and thin with delicate-looking webbing, and will typically extend past the length of the body.

It is best, when trying to breed the Marble Veil Angel, to house a number of angels in the same aquarium until they pair off. After a pair has developed, a flat surface needs to be provided where the eggs can be laid. A piece of slate, a large plant leaf, or even a flowerpot should be positioned at an angle of about 30 degrees in an area of moderate water flow. The female will lay the eggs and the male will follow behind to fertilize. After approximately three days, the eggs will hatch and the fry will emerge. Feed the fry newly hatched brine shrimp until large enough to accept crushed flake food.

The Marble Veil Angel needs to be fed a variety of foods including vegetables as well as meaty foods. Feed a quality flake food as well as live and frozen foods such as brine shrimp and bloodworms.

Write a Testimonial | Ask Customer Service
Nicole L Geneseo , NY
I bought these angel fish (Marble Veil) about 2 weeks ago. They all arrived alive and healthy. After I added them to my fish tank (30 gallons) they have started to thrive. When I first got them they looked just black and white with just some hints of color. Now they have grown at least a third in size and are much more colorful. All of my fish are showing the orange color and one even has a bright orange head. They are living very peacefully with vail tail swardtails... neither species bothers the other at all. The tank also has mollies in it. The angels were a great addition to my tank. They are beautiful specimins and they have paired off and travel in twos now so they are really neat to watch. I would highly recommend this fish they have been peaceful and added much beauty to my tank.
April L Delanco , NJ
Just a note, these fish are not as aggressive as some fish experts say. I am an experienced fish owner, and I have gold fish and angels that live all happily together. The angels are funny; when feeding my fish they wiggle a lot and act like the gold fish when they see me coming to feed them. Sort of a greet me and feed me thing! Oh, and make sure the tank temp is at least 70- 74 degrees, or the angels will die in cold water. My gold fish have no problem with the temp, they all swim happily together!! Have a Great DAY!!!
1-2 of 2 testimonials