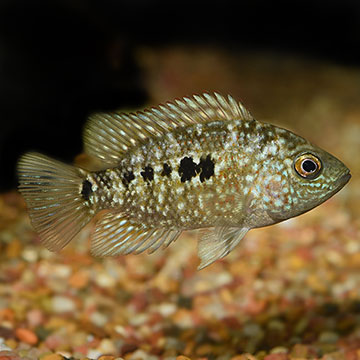 The Texas Cichlid, also known as the Rio Grande Perch and the Rio Grande Cichlid, is an iridescent golden color with pearl highlights and white dots on its body and fins. There are several small black spots at the base of the caudal fin and along the middle, rear half of the body. The juveniles have an iridescent pearl-gray body with white dots on the body and fins. There is a black dot at the base of the caudal fin and one in the center of the body. They are also leaner in size.

It is difficult to distinguish between the male and female Texas Cichlid. The females are less brightly colored and usually smaller then the males. Older males will develop a cranial bump typical in some cichlids. Neutral water with soft to medium hardness, a pH of approximately 7.0, and temperatures of 68-75°F is recommended. Texas Cichlids are open breeders that need well-oxygenated water. They spawn on cleaned rocks, laying up to 500 eggs. The fry are suspended from stones and guarded by both parents. The Texas Cichlid is not as diligent a parent as some cichlids and may eat their spawn.

Texas Cichlids is omnivorous and will eat most prepared and frozen foods, including freeze-dried bloodworms, tubifex, and ocean plankton, as well as flake food and Cichlid pellets.