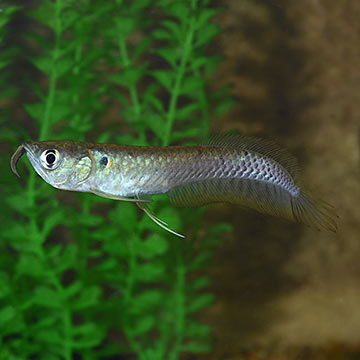 The Silver Arowana, or Arahuana, is known by many alternate names, sometimes making identification tricky. Scientifically, it is most often called Osteoglossum bicirrhosum, but one may also hear reference to O. vandelli, or Ischnosoma bicirrhosum. Among the group known as band fishes, the Silver Arowana is considered a true bony fish. Indigenous to the flood plains of the Amazon River Basin in South America, the Arowana can reach an intimidating 47 inches in the wild, and is often too much for all but the advanced freshwater aquarist to manage. It can survive short times out of the water breathing air by utilizing its swim bladder.

The Silver Arowana prefers a 250-gallon tank with a fine gravel bottom, loosely planted, and soft, peaty water with lots of open space above for swimming. The aquarium must be fitted with a tight, heavy cover because the Arowana will jump, particularly when after prey.

After breeding, the male Silver Arowana is responsible for carrying the large eggs in his mouth where they mature in 50 to 60 days. When young, these fish are easily harassed by more aggressive species such as Cichlids. Knifefish, large Plecostomus, Catfish, and Ornate Bichirs make good tank mates for the Silver Arowana.

I bought my arowana at 3 inches and it is now 11 inches. I've found that it will not eat smaller fish that were raised with it; in fact, my arowana prefers crickets.
Barry S San Antonio , TX
Young arowanas are finicky eaters. Live fish often serve well initially, but as they grow, frozen krill and Hikari Food Sticks seem to be the foods of choice. I had a 27.5-inch adult that also loved crickets and even consumed moderately sized crayfish. Most arowanas can get along with large South American Cichlids like Oscars, Green Terrors, Dempseys, and even pikes. Make the arowana the first fish in the tank and all should go well. What a beautiful fish to have and a wonderful addition to my jumbo community.
Matt M Orlando , FL
I purchased my Arowana 2 years ago when he was only 2 inches long. He is now 16 inches long and gorgeous. He was my first fish and he started in a 30 gallon tank. He is now in a 200 gallon tank. When they are young they are picky eaters and become stressed easily. After 9 inches he matured and began to show his personality. He eats live feeders of all sizes and will eat crickets, shrimp, and Krill. His appetite is never-ending and his hunting techniques are superior to most fresh water fish. There is one recommendation I do have - if your tank is in a high traffic area, the fish will be sensitive to shadows and light from outside the tank which could spook the fish. Treat him well and he'll last for a long time! Enjoy!
Josh B Rutherford College , NC
My silver arowana was the best fish i ever had i bought him when he was 4 inches long and had him for a year till he was almost 14 iches long and he got killed cause some little kid stuck his hands n my tank with hand sanitizer on them. My brother also had 1 that got over 2.5 feet long and the power went out for a long time and he died. Some advice though this fish grows extermely fast if feed right and takin care of, if u have a small tank not a good idea but if u got the room go for it. ive owned just about everything freshwater and saltwater and the arowana is my favorite fish ive ever had.
Jeff B Rockford , IL
I have owned this fish several times. This fish gets too big for all but the largest of tanks. It is a very strong and jumpy swimmer. You must fasten your top down tight. Fun when small but grows too large for most.
Anthony W North Royalton , OH
I purchased two 3" Silver Arowanas. They are beautiful fish and with frequent water changes, they are the ultimate addition to your aquarium. Quick note - young Arowanas are picky eaters. A diet of pre-shelled krill, cichlid pellets or flakes, and crickets provide essential nutrients. Remember, this fish is not for beginners and a large tank is required for their 2-3' adult size.
1-6 of 6 testimonials