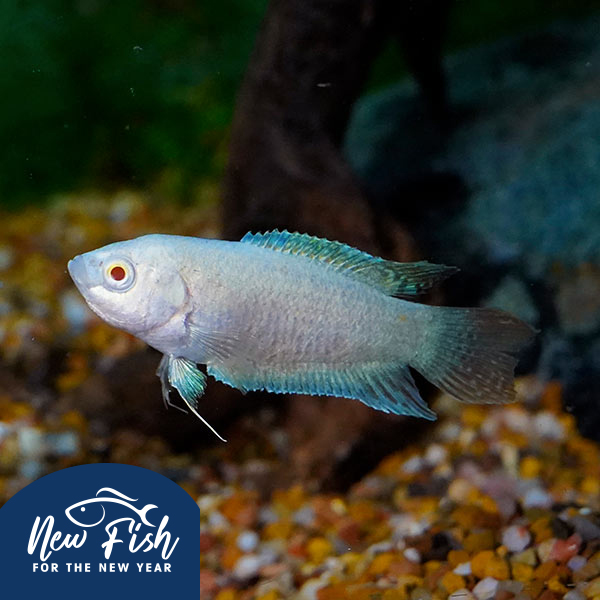 Paradise fish have a long lineage of aquarium captivity, believed to have been kept since 1665 in China. The Albino Paradise Gourami Macropodus opercularis, despite its name, is not completely devoid of color. Its body is white, but contains blue and red undertones, and the same two colors on its fins. However, true to the albino mutation, it has red eyes. Exhibiting a classic Gourami shape, this freshwater fish has a torpedo shaped body, pointed head, and a forked caudal fin.

A hardy fish, it is a member of the Labyrinth fish group, containing an organ that allows it to breathe air. For this reason, it should be housed in a lidded aquarium of at least 30 gallons. The freshwater tank should be planted with hardy plants that allow a lot of places to hide, with soft rocks and soil.

This member of the Osphronemida family is an egg layer and bubble nest builder. For the safety of the female and other tankmates, a breeding tank is suggested for those who wish to breed them.

An omnivore, it requires both an algae-based flake food along with freeze-dried bloodworms, tubifex, and brine shrimp for proper nutrition.