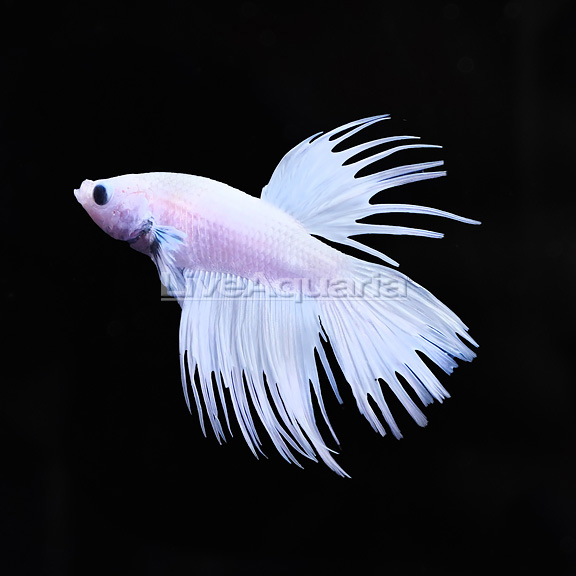 Betta splendens have grown in popularity due to the fact that careful breeding has resulted in many varieties that offer home aquarists Bettas in a variety of colors, patterns, and tail shapes. What makes the Platinum Crowntail Betta a spectacular specimen is the elegant shape of its tail that fans out to 2-3 times the width of its body. In addition to this attention-generating caudal fin, its body is white in color, creating a centerpiece fish for your freshwater aquarium. Only one Betta should be kept per aquarium.

Members of the Osphronemidae family, they make their homes in covered aquariums that are at a minimum 4 gallons in size, as they grow to 3” in length. In the home aquarium, an ideal environment is one that maintains a stable temperature between 75° and 86°F, carbonate hardness of 0-25 KH and pH levels of 6.0-8.0 and is well planted.

Platinum Crowntail Bettas can be bred in the home aquarium. For breeding purposes, males and females can be temporarily housed together. Once laid by the female, the eggs are placed inside a bubble nest and tended to by the male Betta. Fry appear in about 24 hours and must be fed very small food initially, such as crushed or powdered flakes and newly hatched brine shrimp. Fry will also take finely chopped hard-boiled egg yolk.

The Betta splendens is a carnivore, and it is important to feed it quality flake food, frozen or freeze-dried bloodworms and brine shrimp.