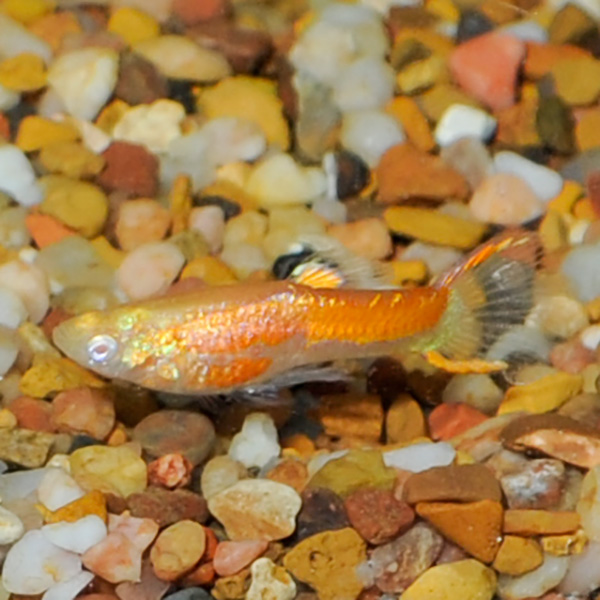 Orange Red Eye Guppies are a beautiful, high-grade fish, considered to be one of the rarest Guppy species aquarium enthusiasts yearn for. Their darker eyes give them an incredibly unique appearance, hence their title.

Guppies of this particular coloration generally tend to be coveted by aquatic enthusiasts, having dominant, solid coloring through their bodies, including fins, which generally have a low growth rate.

The albino variety lack melanin pigment in their eyes and end up with red eyes but have somewhat lighter eyes than the former.

These gorgeous specimens are generally easily available, and have a peaceful temperament, giving even starter enthusiasts an easy learning curve when having them in their aquarium.

Guppies are relatively easy to breed even for the beginning aquarists. If you are interested in breeding guppies, the ideal aquarium should have a covering of floating plants and a breeding box to protect the fry. Adults may eat the fry if left to fend for themselves without the breeding box. The fry should be fed brine shrimp, micro food and pulverized flakes.

The Orange Red Eye Guppy is an omnivore and requires both algae-based foods as well as meaty foods. An algae-based flake food, along with freeze-dried bloodworms, tubifex, and brine shrimp will provide guppies with the proper nutrition.