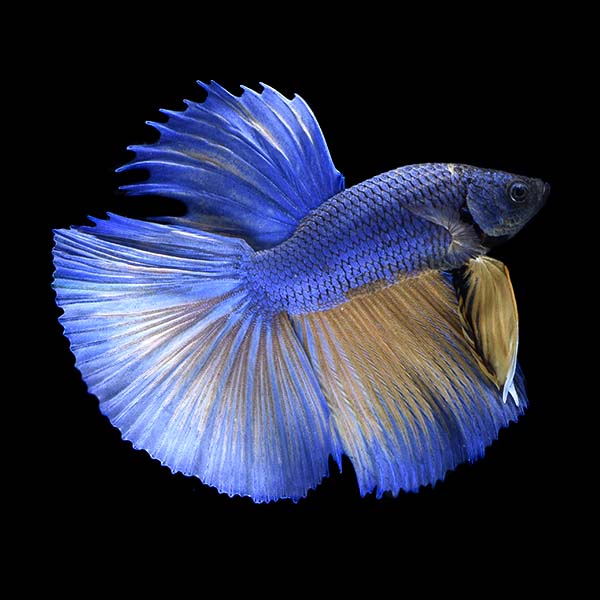 Give your freshwater aquarium fantastic flair with the addition of a Premium Halfmoon Betta. The handsome Halfmoon Betta is a premium variety of Betta splendens that has been selectively bred for its highly ornate fins and caudal (tail) fin that forms a distinct semicircle or "Half Moon" shape with a spread of 180 degrees. This dramatic caudal spread makes the showy Premium Halfmoon Betta a true piscine peacock sure to draw wanted attention to your freshwater aquarium landscape.

The Premium Halfmoon Betta shares the same care requirements as other Betta splendens varieties. As such, only one male Betta should be kept in an aquarium. However, the smaller, shorter-finned females may be housed together with caution. If kept in a community aquarium, the Premium Halfmoon Betta should be housed with peaceful fish that will not nip at the Betta's glorious, flowing fins.

The ideal environment for the Premium Halfmoon Betta is a filtered and heated aquarium that maintains a stable temperature between 75° and 86°F. For best care, Betta splendens should be kept singularly or with suitable, peaceful tank mates in aquariums of at least 4 gallons in size. In addition, the Premium Halfmoon Betta also prefers having a variety of hiding places where it can rest or seek shelter Therefore, an appropriately-sized aquarium with proper filtration, heating, and aquascaping is essential for this otherwise hardy and colorful freshwater aquarium fish.

The Premium Halfmoon Betta is a carnivore, and its diet should consist of a quality flake food, pelleted Betta diet, frozen or freeze-dried Bloodworms and Brine Shrimp.