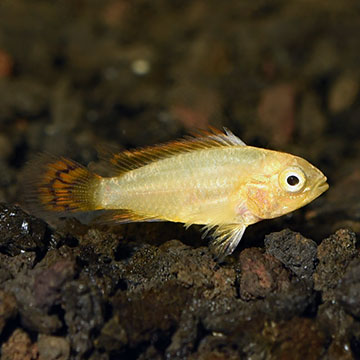 The Orange Flash Cockatoo Dwarf Cichlid is an exquisite color variety of the popular Dwarf Cockatoo Cichlid, Apistogramma cacatuoides. Varying shades of bright orange and yellow coloration gives this Dwarf Cichlid a cheerful vibrancy sure to add much needed flash to any display aquarium. In addition to its brilliant orange coloration, the Orange Flash Cockatoo Dwarf Cichlid sports showy, elongated dorsal fins reminiscent of the crest feather of a Cockatoo, making it a very attractive fish to showcase.

Cockatoo Dwarf Cichlids, also known as Big Mouth Apistogrammas, originate from the streams and backwaters of South America’s Amazon Basin. Over the decades through selective breeding, distinct color varieties such as the Orange Flash Cockatoo Dwarf Cichlid have been developed for hobbyists to enjoy.

The Orange Flash Dwarf Cockatoo Cichlid is an egg layer that prefers to spawn in caves. Once the female has laid her eggs, the male will follow to fertilize them. After fertilization, the male then leaves the brood for the female to tend. The fry will be free swimming within seven to ten days, at which time they should be fed newly-hatched brine shrimp. They Orange Flash Dwarf Cockatoo Cichlid is a fast-growing species and the fry will reach sexual maturity in about five months.

The Orange Flash Dwarf Cockatoo Cichlid is a carnivore, and will consume a wide variety of foods. Bloodworms, Tubifex, Flake Food, and both frozen and live Brine Shrimp and frozen Mysis Shrimp will make excellent food for these fish.