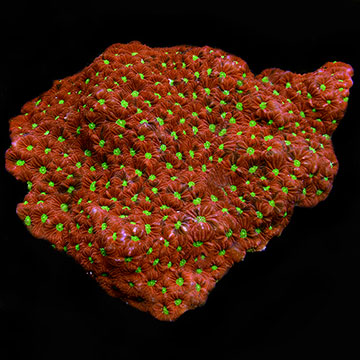 The Red and Green Favites War Coral injects an impressive burst of color sure to command attention in any reef aquarium. The Red and Green Favites War Coral represents a new generation of exotic color varieties that is transforming the reef hobby. The deep red coloration sets off the green eyes to dramatic effect sure to put any avid coral collector on a warpath to obtain this beauty.

The Red and Green Favites War Coral is an exceptional color variety of Favites, a large polyp stony (LPS) coral often referred to as Moon, Pineapple, Brain, Closed Brain, Star, Worm, or Honeycomb Coral. Favites are the most common and prolific corals in the world and often share the same common names with their close relative, the corals from the genus Favia. Though very similar in appearance, the easiest way to distinguish corals from the Genus Favitesfrom corals from the Genus Favia is to examine the corallites. The individual corallites of Favites corals share common walls that create a honeycomb appearance. In addition, the corallite walls of Favites corals are generally more raised and tend to be more uneven, accentuating the geometric appearance of the Favites corals.

For continued good health, calcium, strontium, iodine, magnesium and trace elements should be added to the water column. The Red and Green Favites War Coral satisfies the majority of its nutritional requirements by means of photosynthetic, symbiotic zooxanthellae algae hosted within its body. However, it will benefit from supplemental feedings in the form of micro-plankton or baby brine, fed twice per week in the evening while its tentacles are visible.