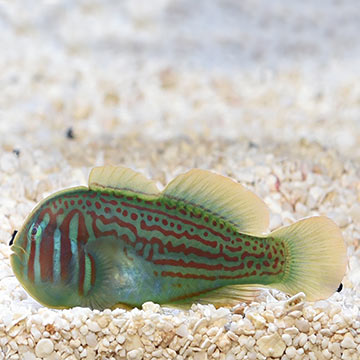 The Green Clown Goby, also known as the Earspot Coral Goby, is common within the reefs of the Indo Pacific, found usually among soft and hard coral colonies. They are a small stocky shaped fish with a very large head for their size. There are many different color variations, and this species is a yellow to greenish-tan color with orange vertical stripes on its head. They are a peaceful fish that makes a wonderful addition to a reef aquarium containing colonies of polyp corals, as they enjoy swimming and hiding amongst the polyps. However, they may nip at the polyps of SPS corals.

It requires a 10 gallon or larger aquarium preferably with branching coral. It will rarely become aggressive towards other fish, but will fight with its own kind in smaller tanks. Therefore, it is best if it is kept with other docile species.

Write a Testimonial | Ask Customer Service
Angela Minneapolis , MN
I've had my Green Clown Goby for a couple of weeks now and he's just beautiful. He looks just like the picture. He really likes Mysis shrimp and will eat right from the Turkey baster I use to feed the fish. He's a lot of fun to watch and seems to be bonding with the Tail Spot Blenny we got at the same time. Very pleased with the purchase.
Richard L Corpus Christi , TX
This guy and my long nose hawk fish are often hanging out together. This guy looks just like in the pic, and very peaceful. He is a bottom dweller, and is very relaxed. Most active during feeding time.
Steph A Troy , NY
I've my Clown Goby for around 8 months now, but he is at least 2 years old. He has to be the cutest fish in the world. He spends 90% of the time hiding and swimming around in my Anthelia, sticking his head through the polyps. Most active during feeding, where he snatches food so quickly, it doesn't even appear he's eating if you don't watch closely. Highly recommended.
Timothy M Brackney , PA
Be warned that this is a VERY SMALL fish. How small? I have a 28 gallon NanoCube as my quarantine tank. One day after this fish arrived, he came up missing. After many hours tearing down the whole system, I picked his parts out of a pump. He had been able to slip right through the overflow grate in the tank. That's small! If I ever try again with this lovely variety, I'll use underwater epoxy to glue some nylon window screen to the overflow grate.
Sarah R Georgetown , TX
This fish is a must have for a nano reef. He is not very active, but always out in the open. Even my damsel doesn't bother him because clown gobies have a thick slime coat that apparently tastes AWFUL!!!
Elizabeth T Washington , DC
This goby has a very different personality than the yellow clown goby, at least in my tank. He is very chill and sort of mellow, very peaceful with the other fish, often perching within the rockwork. He is not out in the water column or as outgoing as the yellow clown goby. Be patient and he will come out more over time. Feeding well on cyclopeeze and reef frenzy.
HeatherH Z San Jose , CA
I love my little green guy! So cute but very timid. He hangs out in the rock hiding and darts around at feeding time to snatch bits of food. Not a fish you will see swimming around and if your tank is large...you just may never see it again. It's brilliant at hide and seek.
E Mc San Francisco , CA
I have had my goby for 1-1/2 years and love him. His 'home' is in the fingers of the Devil's Hand lobophytum but he also spends the day perching in the open all over the tank (never on the rocks but always on other corals). He's in a 30 gallon with a couple peaceful tank mates.
1-8 of 8 testimonials