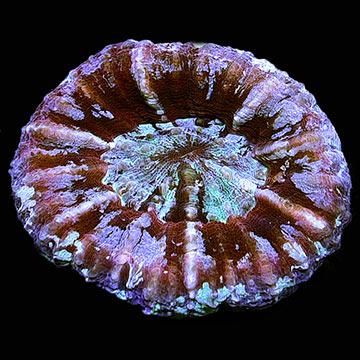 The Scolymia Coral is a large polyp stony (LPS) coral and referred to as the Doughnut, Scoly, Artichoke, or Disk Coral. It is a round, solitary coral, usually having a single oral opening present in the center, however, multiple openings have been present in some species. The Scolymia Coral, Colored comes in a variation of purples and maroon with cup, saucer, flat, or dome-shaped variations. It is not an outwardly aggressive coral, but should be provided with plenty of space between itself and other corals because it can expand twice its size during the day.

Write a Testimonial | Ask Customer Service
Todd R Los Angeles , CA
Very happy with the specimen I received. There is a large variety of different colors throughout coral which makes it a good centerpiece. This product is a great value for what you receive.
1-1 of 1 testimonials