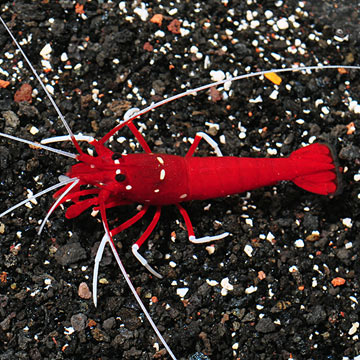 The diet of the Blood Red Fire Shrimp should include freeze-dried, live or frozen foods, and flaked foods.

Write a Testimonial | Ask Customer Service
Randy H Woodland Hills , CA
The Blood Red Fire Shrimp is a vibrant shrimp that's great for any aquarium! Don't worry about this little guy finding food. In fact, I'd suggest cutting any food into pieces otherwise this shrimp will steal it all. Overall, a peaceful and very interesting shrimp.
Donna C Waltham , MA
These shrimp are very cool to watch, but very secretive. Mine hide a lot of the time, but start moving around when food is introduced into the tank.
Ann W Dearborn , MI
I ordered these as part of your shrimp "package". I received a beautiful pair of large shrimp. They are fun to watch and ravenous eaters. They do tend to hide most of the day, but become more active towards night. They help with the leftovers from the day! These shrimp make a wonderful addition to any aquarium.
Bill S Orlando , FL
Many times blood shrimp prefer low light and as a result in reef aquariums will hide much of the time. Mine is usually only present when I'm maintaining my reef or feeding it. Despite these negatives no other common shrimp in the aquarium trade looks as brilliant as a blood shrimp.
Cadence W Huntsville , AL
I bought one of these for my 10g nano reef tank to help clean up any extra food and such. I have to say this is one of my best purchases I have made. Incredibly active at feeding, though it does like to hide the rest of the time. Mine has chosen a cave at the front of the tank so I still get a great viewing of them.
Sky Cartwright Knoxville , TN
I bought my fire shrimp about a month ago and I love the little guy. He is shy but he has molted twice since I got him. A great eater, I will order more stuff from liveaquaria in the future. I highly recommend them!
1-6 of 6 testimonials