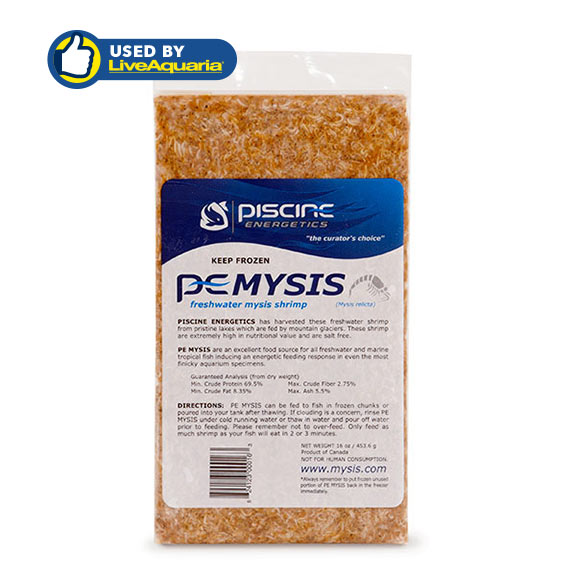 Feeding Directions:
PE Mysis can be fed to fish in frozen chunks or poured into your aquarium after thawing. If clouding is a concern, rinse PE Mysis under cold running water or thaw in water and then pour off water prior to feeding. Please remember to not to over feed. Only feed as much shrimp as your fish will eat in 2 or 3 minutes. Remove any uneaten food.

Did You Know? PE Mysis Are:

What is Mysis relicta?
Mysis are not a true shrimp though they do closely resemble and are, in fact a primitive relative of the shrimp found in the oceans. There are 58 genuses of mysis which make up the Mysidae family.

PE MYSIS is 100% Mysis relicta which is one of the two types of freshwater Mysidae. All other species of Mysis are either saltwater or estuarine species.

PE MYSIS are part of the zooplankton, the small invertebrate animals found in lakes that feed on microscopic algae (phytoplankton) as well as other zooplankton. In turn these organisms form the basis of the food supply for many fish.

There are two differences between PE MYSIS and the other zooplankton typically found in lakes.

1.) PE MYSIS have a longer lifespan and usually live upwards of two years. The typical zooplankton, composed of animals known as copepods, cladocerans, and rotifers, live anywhere from only several days to several months. PE MYSIS is a nutritionally complete food. PE MYSIS is a natural product enriched by the food chain of the lakes from which it is harvested. This is because of Mysis relicta's highly diversified eating habits. The extremely high levels of EPA and DHA (fatty acids) is related to the food chain found in deep cold waters, such as those where Mysis is harvested. These fatty acids not only provide your fish with essential nutrition, but also stimulate an energetic feeding response.

2.) PE MYSIS range in size from newly released young of about one-eight inch to adults of up to 3/4 inch. The other zooplankton are normally much smaller ranging from one one-hundredth to one tenth of an inch in total length. It is the size of the Mysis that makes them of interest as a fish food. Fish that consistently feed on Mysis grow much faster than those feeding strictly on the other smaller zooplankton. Mysis are extremely high in nutritional value and are salt free.