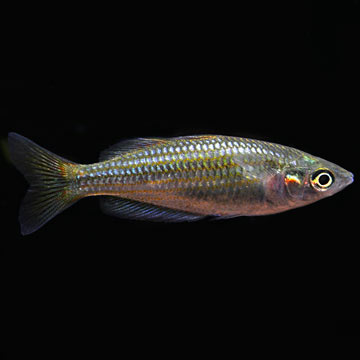 The Australian Rainbow, also known as the Murray River Rainbow, is one of more than five subspecies of Melanotaenia splendida. Rainbowfish are known for their characteristic large eyes, black or silver band that runs through the middle scale rows, deeply forked mouth, and two dorsal fins.

This peaceful Rainbow is a schooling fish that thrives in a planted aquarium, but not too densely planted that there is insufficient free-swimming places available. The aquarium should have a gravel substrate; the colors of the fish may intensify with dark colored gravel.

An egg layer, the Australian Rainbow reproduces more easily in a separate breeding tank with a moss substrate. Courtship begins with the male displaying his brightest colors. At a temperature of 75°F, the fry will hatch after six or seven days. After the fry hatch, the adults should be removed from the breeding tank. The fry should be fed an omnivorous diet starting 24 hours after they hatch, as they are still being fed by their yolk sac.

Although Australian Rainbows have large mouths, their throats tend to be narrow. With this in mind, foods should not be too large. The Australian Rainbow is an omnivore and should eat a mixed diet of flake foods, live foods, and plant matter.

Write a Testimonial | Ask Customer Service
Travis S Jefferson , GA
Just got 5 of these little guys and they are really playful. It is no joke when it says they are great schoolers. They stay right with each other all the time. The are very beautiful and you can see their mood change when they get excited for feeding. All in all a great fish!
1-1 of 1 testimonials