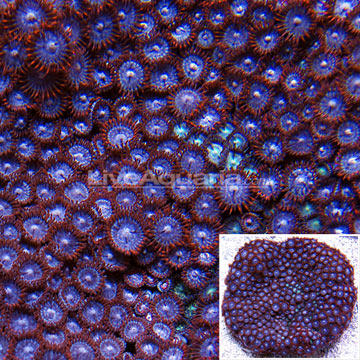 The Horizon Colony Polyp boasts a contemplative coloration that exudes a tranquil beauty. Like stars slowly emerging throughout a darkening twilight sky, the Horizon Colony Polyp has a hypnotic, celestial quality that is simply breath-taking. This unusual color morph is sure to tantalize Zoanthid collectors and budding reef aquarium hobbyists. The Horizon Colony Polyp sports a lavender grey mouth with a radiating blueberry-colored plate that terminates to red-umber tentacles for an unexpected surprise.

The Horizon Colony Polyp adds a stunning yet harmonious flush of color accentuated by the repeating, colonial nature of the polyp corals. Over time, an established colony of Horizon Colony Polyp will create a living tapestry of exquisite beauty for a refined reef aquarium display.