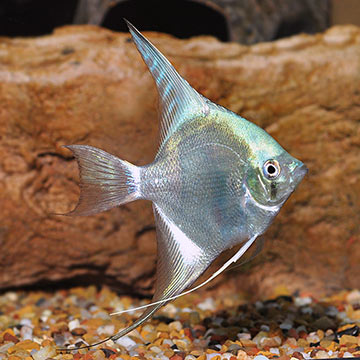 The Blue Angel will add drama and brilliance to your community aquarium. A beautiful strain of angelfish that is primarily silver, with a powder blue coloration that runs from the fishes lips, face, operculum (gill covering) and along the upper portions of the fishes body. Vertical black bars are visible along the fish’s body. As the fish matures, the blue coloration will become more prominent on the dorsal, ventral and caudal fins.

It is best, when trying to breed the Blue Angel, to house a number of angels in the same aquarium until they pair off. After a pair has developed, a flat surface needs to be provided where the eggs can be laid. A piece of slate, a large plant leaf, or even a flowerpot should be positioned at an angle of about 30 degrees in an area of moderate water flow. The female will lay the eggs and the male will follow behind to fertilize. After approximately three days, the eggs will hatch and the fry will emerge. Feed the fry newly hatched brine shrimp until large enough to accept crushed flake food.

The Blue Angel needs to be fed a variety of foods including vegetables as well as meaty foods. Feed a quality flake food as well as live and frozen foods such as brine shrimp and bloodworms.