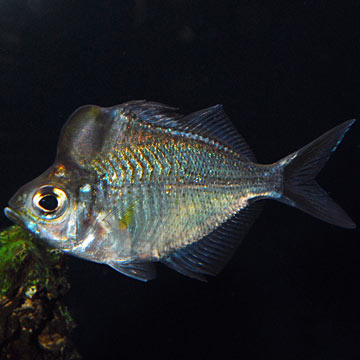 Be one of the first to keep this fascinating glassfish from the fast-flowing forest streams of Myanmar! A relative newcomer to the aquarium hobby, the Humphead Glassfish wasn't scientifically identified until 2003. This thin, deep-bodied, near transparent double-taker features a distinctive dorsal spine extending from its skull that creates its namesake "humphead." Males will display a more predominant hump than females.

The Humphead Glassfish is a hardy addition with a curious disposition. To best replicate its natural habitat, keep schooling Humphead Glassfish in a well-oxygenated aquarium with pristine filtration and plenty of swimming room. They are peaceful enough to keep in a planted community habitat, but do grow large enough to put smaller tetras at risk of becoming a snack, so stock accordingly.

The Humphead Glassfish won't eat your plants, but will readily accept most pelleted, frozen or fresh aquarium foods.