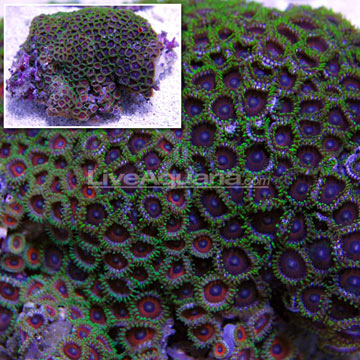 The Eagle Eye Zoanthus Colony Polyp sports layers of dynamic color to mesmerizing effect. The center coloration of dark blue is ringed with a contrasting orange that terminates to a layer of saturated mossy-green tentacles. The resulting effect is an impressive flush of color that is visually stimulating yet harmonious thanks to the repeating, colonial nature of the polyp corals. Overtime, an established colony of Eagle Eye Zoanthus Colony Polyp will create an impressive living carpet of color reminiscent of a field of underwater wildflowers.

Write a Testimonial | Ask Customer Service
Kyle B Saint Petersburg , FL
These to me are gorgeous zoas! Under actinic lighting (especially LED's) they are breath taking. Plus, they grow fast.
1-1 of 1 testimonials