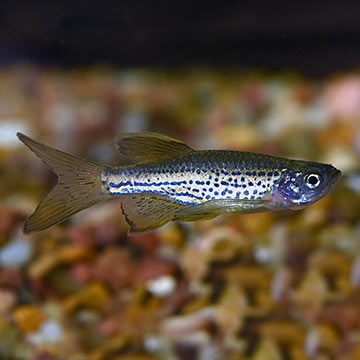 Native to the Ganges region in Eastern India, wild Leopard Danios are found in a variety of habitats, ranging from fast-moving streams to slow-moving, nearly stagnant ponds. Members of the Danio genus have been a long-time favorite among freshwater aquarists for their attractive coloration, active personality, and hardiness. The Longfin Leopard Danio is best kept in groups and gets along with other Danio species as well as other peaceful fish of the same size. In the home aquarium, this member of the Cyprinidae family prefers a well-planted aquarium with large open swimming areas. Since the Longfin Leopard Danio is an omnivore, feed it a varied diet of flake and frozen foods.

Male Longfin Leopard Danios are generally more torpedo shaped, while females tend to have a larger belly. Generally, male Longfin Leopard Danios spawn with and remain loyal to one female. A breeding pair should be placed in a breeding aquarium with fine-leaved plants for them to spawn over. Roughly 300-400 eggs are produced and hatch within two days. The fry should be fed small pieces of live foods, such as brine shrimp.

Write a Testimonial | Ask Customer Service
Deanna
Leopard Danios are a very good first fish. They have very pretty long fins. They mix well with most community fish.
1-1 of 1 testimonials