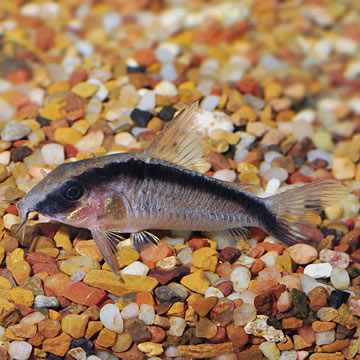 The Skunk Cory Cat adds a splash of drama to any home aquarium. Also known as Sands' Cory Cat, Corydoras arcuatus is active, yet peaceful, especially when kept in small schools. Though other members of the Corydoras genus boast black stripes over the eyes and down the back, the back stripe of this Skunk Cory Cat splits just before the tail and trails down to color the lower edge of the caudal fin. In most species, this black stripe does not split and instead continues along the caudal fin's upper edge.

Just as active as other Corydoras, the Skunk Cory Cat thrives in peaceful community aquariums with like sized fish. Primarily bottom dwellers, Corydoras are adept at cleaning excess food from aquarium substrate. Their most playful antics come, however, when an entire group speeds to the water's surface to feed on flake or other foods. For optimal health, feed these omnivores a varied diet of flakes, tablets, shrimp pellets, tubifex, or other frozen foods.

Native to the Rio Unini, a whitewater area of the Rio Negro River in Brazil, the Skunk or Sands' Cory appreciates water currents more so than other members of the Corydoras genus. In the home aquarium they do best in sandy substrates surrounded by areas of moss, ferns, and other plants.

Like other Cory Cats, this species will spawn their eggs on aquarium glass, driftwood, or amongst the stalks of plants. Males are slightly slimmer than females, especially when viewed from above. To offer the best chance of fry survival, feed microworms 3-4 days after hatching and separate the fry from larger fish that may see them as food.

Write a Testimonial | Ask Customer Service
Judy D Lima , OH
Skunk cory cats are quite fun. Fish may have small brains but they have big hearts! When one of my skunk cory cats was lost in a tragic accident (my big tin foil accidentally sucked him up when going after a veggie round - lost both fish), the remaining skunk was noticeably "depressed" - spent much of his time inside the hollow driftwood log away from the other cory cats. Eventually, I was able to find more skunk cory cats so now he has two younger buddies. It took the older one a while to warm up to them - but now, he makes sure the younger ones aren't too far from his sight. Good thing as my new in tin foil barbs are almost as big as the previous two (although they seem to be more careful eating veggie rounds). You will want at least two of these handsome gems.
1-1 of 1 testimonials