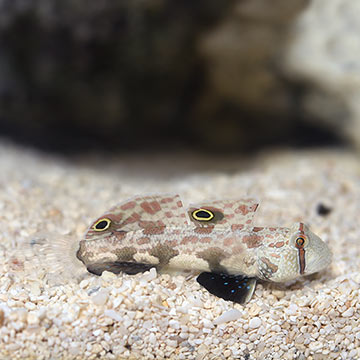 The Two Spot Goby is also referred to as the Twinspot Goby, Signal Goby, or Crabeye Goby. The head and body are white splattered with orange markings. Its erect dorsal fins are distinctly marked by eyespots.

It should reside in a 10 gallon or larger aquarium with live sand as a substrate, and an attached populated refugium. It will rarely act aggressively towards other fish, but is territorial, and will fight with its own kind unless they are a mated pair.

Under correct conditions, the Two Spot Goby will spawn successfully in an aquarium.

Usually the Two Spot Goby feeds off the bottom sifting through the sand for food. It should be fed a variety of either live or vitamin-enriched frozen brine shrimp, mysis shrimp, live black worms, and prepared foods for carnivores.

Write a Testimonial | Ask Customer Service
Kimberly Janz Wisconsin Rapids , WI
We fell in love with a pair of these at the retail store in Rhinelander. After bringing them home, they earned their names-Scoop and Dig the Terraformers as they reshaped much of the terrain! These guys are awesome!
Jared Padilla Manhattan Beach , CA
I bought these Gobies as a pair and right after acclimation, the two began exploring my 24 gallon tank with great amounts of energy as they bounced up and down like a helicopter taking off and landing. They were so cute because they never left each other's side while scooping sand in their small mouths. Three days later one of them disappeared in their burrow and came out of the hole one week later with a baby Two Spot Goby! These are great fish for cleaning the bottom of the tank and I would recommend them to any novice or expert.
1-2 of 2 testimonials