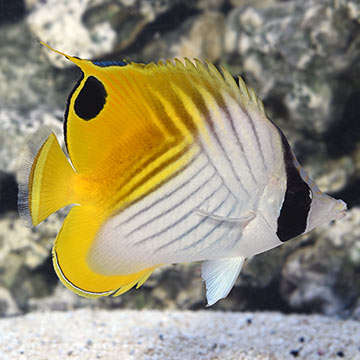 The Auriga Butterflyfish's diet should consist of meaty items such as fish, crustaceans, mysis shrimp, and frozen marine preparations

Write a Testimonial | Ask Customer Service
Thomas Brown Cedar City , UT
A very attractive and interesting species. Once acclimated, they can become agressive feeders and will greet their keeper with enthusiasm. They must be fed a great deal of meaty fare, often. A great way to add color and personality to your fish only or FOWLR aquarium!
1-1 of 1 testimonials