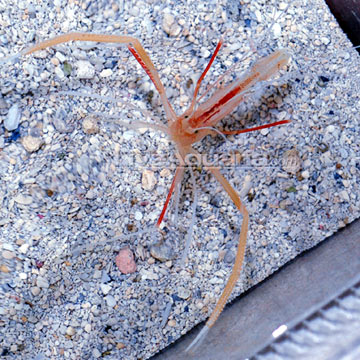 The Cave Shrimp, also known as the Ghost Boxing Shrimp, has a white body and legs, with a red stripe covering the back of the body. Members of the Stenopodidae are called "Boxing Shrimp" because of the large pinchers on their third set of legs. They often hold these pinchers erect, giving the appearance of a boxer ready to fight. These shrimp are collected from very deep water, where they inhabit overhangs and caves. In the wild, they serve as a cleaning service for fish as they will climb upon the fish and remove parasites from their body.

Sufficient room should be provided in the aquarium to allow the Cave Shrimp to move without its long antennae touching neighboring corals or anemones. These shrimp must be kept singly, or as a true-mated pair, being intolerant of others of the same species. It may also harass other smaller shrimp of different species. It is relatively hardy, but must be acclimated slowly to avoid any salinity and/or pH shock. It is intolerant of high nitrates or copper levels, and the aquarium should be supplemented with iodine to promote proper molting.

Breeding the Cave Shrimp is usually not successful. Larvae are generally destroyed by filtration and skimming.

In the wild, the Cave Shrimp feeds on parasites, dead tissue removed from fish, and other tiny organisms. In the home aquarium, it will accept most flaked and frozen foods, plankton, and meaty items.

Write a Testimonial | Ask Customer Service
Brenda TX
We have one of these, I am glad to read it is peaceful as it is very scary looking. Ours is quite large and has been living in our tank about 5 years. Even though he is scary looking, I have never seen him hurt any of our fish, even small fish.
1-1 of 1 testimonials