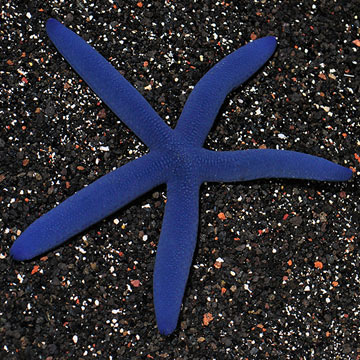 Small pieces of clam meat or tablets can be placed under the Blue Linckia Sea Star starfish to supplement its diet.

Write a Testimonial | Ask Customer Service
Denise McL South China , ME
This star is well worth the money. It is actually cheaper than the others and is one of the best. It is a colorful thick star and is ready to eat the algae off from your tank glass. Conforms to the rocks in your tank, great cleaner. Don't forget the star is just as valuable at cleaning as snails, shrimps and crabs are. A must for everyone's aquarium.
Louise T Menominee , MI
L Right after introducing the blue Linckia into the tank, it started crawling all over the live rock in the aquarium. It is a beautiful sea star, and it will be the highlight of your tank (and a great cleaner). I ordered a medium, but it ended up being bigger than a large! Great buy.
1-2 of 2 testimonials