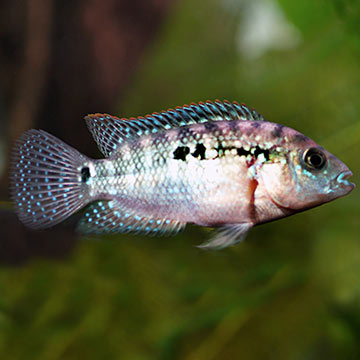 The Jack Dempsey is a popular freshwater fish that originates in the murky warm waters of Central America. It has a base color of dark brown to gray, and displays many iridescent blue and green spots, giving this fish a spectacular look. When breeding, these colors will intensify. The dorsal fin is lined in red, and the female's overall coloration is subdued compared to the male.

The Jack Dempsey requires an aquarium of at least 55-gallons, with a fine sand bottom. There should be rocks and roots for them to hide among. The plants should be hardy as the Jack Dempsey will burrow around and attack them. The aquarium should be divided into territories using hardy plants, if possible. They are territorial and will eat smaller fish that they can swallow.

It is difficult to distinguish between the male and female Jack Dempsey. The females are less brightly colored and usually smaller then the males. Neutral water with soft to medium hardness, a pH of approximately 7.0, and temperatures of 78-82°F is recommended. Jack Dempsey's are open breeders that need well-oxygenated water. They spawn in burrows, laying up to 500 eggs. The fry are well protected by the parents, and once mated, they will continue to spawn once the fry have grown.

Jack Dempsey is carnivorous and will eat most prepared and frozen foods, including freeze-dried bloodworms, tubifex, and ocean plankton, as well as live fish.

Write a Testimonial | Ask Customer Service
Josh H Anaheim , CA
I really recommend picking up a Jack Dempsey. It's very peaceful when alone, and seems to be compatible with my other Cichlids.
Andrew Indianapolis , IN
There isn't a South/Central American Cichlid as hardy as a Jack Dempsey. They will tolerate anything. Cold/hot water, old water, high water hardness, my kids...it doesn't faze them. Mine has grown to about 9 inches in 3 years. They are compatible with many cichlids, as long as they have their own room. I've kept them with Salvini, Firemouths, & Convicts without any issues. I kept my 9 inch Dempsey with 8 inch Nicaraguan cichlids and a 12 inch pleco in a 55 gallon aquarium. Beyond them beating up the plants, rocks, & my hoods, they got along quite well.
Frank P Leona Valley , CA
Have not kept Cichlids that long but I wanted a Central American variant as they seem hardier. My Jack Dempsey is awesome - colorful, bright, intelligent and a voracious eater. He lives by himself and does not seem to care - but he knows my wife and I and is already learning how to beg for food. Can't miss with this species particularly if it is in a roomy tank and does not have to guard it's territory.
Philip Utica , PA
I've owned my Jack dempsey for about 6 months now, and being an Oscar owner, I'm utterly shocked by the slower growth. However, it's personallity and trust are beyond compare, once they realize you're the hand that feeds, they're like little kittens!
Anonymous
I had bought a Jack dempsey about 5 months ago. being an oscar owner, i was shocked at the slower growth rate, but at the same time, I was even more shocked at how quick he took to me. he has such a great personality. I would recommend Jack Dempsey's to anyone who wants a very lively, colorful fish.
Jake C Wilmington , OH
The Jack Dempsey is my favorite Cichlid, mine will quickly darkin up up or get alot lighter whenever spooked or in a fighting mood which makes it fun to whatch.
Jason L San Antonio , TX
Having owned them before I can say you won't find a better fish. They are quite social. Ive kept then before and they are quite fun to keep. Beautiful and Hardy. They are for any level of cichlid keeper. I bought Jack's as my first cichlid and here I am years later getting ready to own them again after being out of the hobby for a bit.
1-7 of 7 testimonials