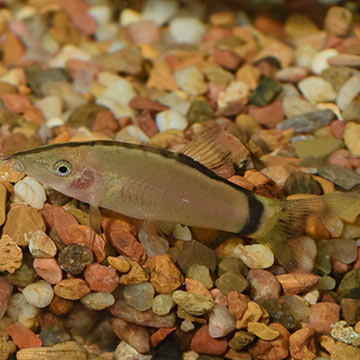 The body of the Skunk Botia Loach is pinkish in coloration, and like other Botia loaches it can be identified by the four pairs of barbels protruding from the mouth area. A black stripe runs from the nose back to the tail along the back of this fish, lending to its name, Skunk Botia. The Skunk Botia Loach is sometimes referred to as a scaleless fish they do infact have small scales that are embedded in there skin.

The Skunk Botia Loach is an active scavenger that is a semi-aggressive fish that enjoys the company of its own species, or other semi-aggressive fish. It will school with others of the same age and size. The skunk Botia Loach appreciates caves, holes, and other places to hide, especially when it sleeps. Because it originates from streams, it requires water currents in the aquarium.

The skunk Botia Loach requires small amounts of food several times a day. Younger Loaches will eat most prepared foods while older ones may be more finicky. Feed them a varied diet of bloodworms, brine shrimp and a quality flake or pellet food.

Write a Testimonial | Ask Customer Service
Jeremy Butterfield Johnstown , CO
Wonderful service! I have had these fish in my tank for about 3 weeks now. Beautiful healthy hardy fish but they are more agressive than my other loaches. They attack the fins of my other fish. If you try these fish, they will be a nice addition to the tank, but be careful and watch the tank. These fish have attacked fish 4 times their size. This is the first time I have come across this problem with a loach.
1-1 of 1 testimonials