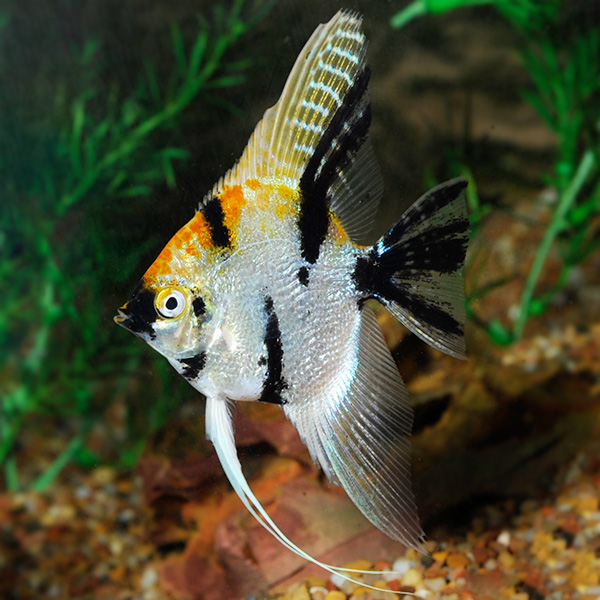 The Koi Angelfish is a strain of angelfish that has been bred for it's mottled black and white coloration. Some may have gold markings on the head. The young specimens may have a red hue beneath the eyes that fades with age. These are beautiful angelfish, and like Koi, the coloration of each fish will be different.

It prefers a well-planted aquarium of at least 30 gallons with soft, slightly acidic water. Rocks and driftwood can be added to the aquarium, but leave plenty of space for swimming.

It is best, when trying to breed the Koi Angelfish, to house a number of angels in the same aquarium until they pair off. After a pair has developed, a flat surface needs to be provided where the eggs can be laid. A piece of slate, a large plant leaf, or even a flowerpot should be positioned at an angle of about 30 degrees in an area of moderate water flow. The female will lay the eggs and the male will follow behind to fertilize. After approximately three days, the eggs will hatch and the fry will emerge. Feed the fry newly hatched brine shrimp until large enough to accept crushed flake food.

The Koi Angelfish needs to be fed a variety of foods including vegetables as well as meaty foods. Feed a quality flake food as well as live and frozen foods such as brine shrimp and bloodworms.

Write a Testimonial | Ask Customer Service
Betty B Clarksburg , NJ
My Koi Angel is so fascinating and intelligent. As soon as he sees me, he swims to the front of the tank to be fed. He is not shy at all and watches everything I do. He loves bloodworms and brine shrimp. He is very docile and compatible with all my community fish. A great addition to any community tank.
1-1 of 1 testimonials