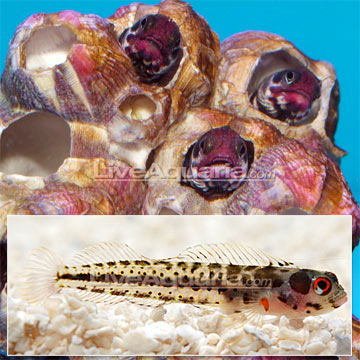 A well-established 10 gallon or larger aquarium with multiple hiding places and plenty of rock is a suitable environment. The Mexican Barnacle Blenny is a very entertaining fish, as they race as fast and furious as they can to snatch food from the water column while trying not to be eaten by the other fish. The body of this fish is seldom seen as they will take up residence in a small crevice in the rocks. They are a very attentive fish constantly watching about the aquarium waiting for a meal to come their way.

The Mexican Barnacle Blenny does best in well-established aquariums with large numbers of crevices in the rocks in which it can hide. The diet should include meaty items such as finely chopped crustacean flesh, vitamin enriched frozen brine and mysis shrimp.

Write a Testimonial | Ask Customer Service
Randy L Green Bay , WI
One of my favorite marine fish. Will use live rock and empty shells as homes if barnacles not available. Lightning fast to eat and return home. Smaller non-aggressive tank mates are a must.
Adam San Diego , CA
I have two in my tank and they each have their own spot. One is in a hole in a piece of live rock, and the other is in a barnacle shell... they stay there pretty much all day and then when fed, they go crazy!!! Pretty neat fish, worth the money for sure.
Jack S Canton , CT
This little guy is my favorite. He lives in his barnacle and watches everything. If I approach the tank, he thinks I'm his personal waiter. Fastest fish in the tank when he darts out to grab a morsel and returns. Took me a week of close watching to actually see him get back into his barnacle because he moves so quickly.
Jennifer R Pleasantville , TN
I bought four for my 135 gallon tank and I was kinda worried that I may not see them while they acclimated in when introduced or got larger since in that large area they would be so small......I LOVE these fish they found all kinds of nooks and crannies to hide one even took up in the barnacle rock I purchased in anticipation of buying these fish.....all four where hanging out and stalking the water column in anticipation for the next feeding I can't wait till they grow up some more!
Frank A Corpus Christi , TX
What everyone says about this little guy is true,he is the character of the tank. My wife named him wild Bill and you will understand that name at feeding time,this is a wonderful fish for the reef tank.
Derek R Punta Gorda , FL
One of my all time favorite fish and absolutely perfect for a nano or other small aquarium. Beautiful fish, if you get the chance to see all of it, usually just pokes its head out of a hole or shell and watches everything with its "bobble eyes." Beware as this fish is a tempting target for bottom dwelling predatory animals like crabs or large shrimp.
Kristy J Reston , VA
This little Blenny is absolutely adorable. Keeps his head poked out of his barnacle and often switches back and forth between the various openings. He likes to nibble at the edges of the barnacle openings to more quickly accommodate his "room" transfers. I love the little guy!
1-7 of 7 testimonials