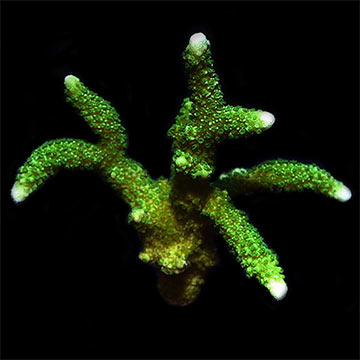 The Neon Green Montipora Digitata Coral is a small polyp stony (SPS) coral often referred to as Velvet Branch, or Velvet Finger Coral. Montipora Corals come in a vast variety of forms and colors, but this variety is a nice deep vivid green, with several branches. Digitata Corals will typically grow in a vertical fashion, but this is highly variable depending on its environmental conditions.

This Neon Green Montipora Digitata Coral is peaceful and can be placed in close proximity to other similar peaceful corals in the reef aquarium. Aquacultured Montipora is one of the easier to maintain SPS corals and grows rapidly in the established reef aquarium. It will require medium lighting combined with a medium water movement within the aquarium. For continued good health, it will also require the addition of calcium, strontium, and other trace elements to the water.

The Montipora Digitata, Neon Coral frags are mounted on a composite plug that can be affixed to live rock anywhere in the aquarium with gel super glue or epoxy.