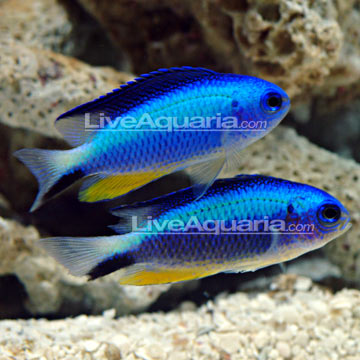 The Neon Damselfish is also known as Allen's Damselfish and the Allen's Pomacentrus. It was named after Dr. Gerald Allen, the icthyologist who is recognized as the world's authority on damselfishes.

It is a semi-aggressive fish that requires hiding places in a 20 gallon or larger aquarium.

The Neon Damselfish diet should include a variety of meaty foods, herbivore preparations, and flaked foods.

Write a Testimonial | Ask Customer Service
John K Malibu , CA
For a long time I'd avoided damsels since I'd heard they are aggressive. I've had plenty of chromis (small schools), and while not aggressive, they'd disappear quickly one by one. The last one would then live for quite a long time. But I'd read there are some damsels that aren't so aggressive and I gave the neons, azure and blue sapphires a try. All have been docile, and the stunning neon blue of the Neon's is beautiful (though they do tend to get darker as they age a couple years). The alleni and springeri hold their colors better. Great fish, I've got mine in a mixed reef. Also have a Talbot's, but he's a bit of a jerk to newer fish, though not so bad I've had to pull him. But do try the other 3.
1-1 of 1 testimonials