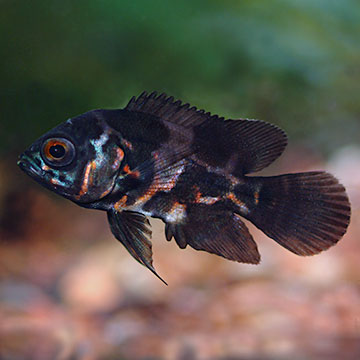 The Tiger Oscar is a color variation of Astronotus ocellatus Oscar. It is also known as the Marble Cichlid or the Velvet Cichlid and is a colorful addition to a large aquarium. The Tiger Oscar has a blue-black background with an orange-red pattern. The dorsal fin has an eyespot that is very brightly colored. They will form a pair, make a nuclear family and are generally peaceful in nature. It is hard to tell the difference between the male and females, but during spawning the female has obvious genital papilla.

The Tiger Oscar requires a large aquarium of at least 70 gallons with a deep sand bottom and a few large rocks. They will dig up plants; so any that are in the tank should be potted with the root surfaces covered with rocks. Using floating plants is a good compromise to this problem. Tiny Oscars form a tight cluster for protection and this is normal behavior for juvenile fish. Large Oscars are not as territorial as most other cichlids when full grown but will consume anything they can fit into their mouths.

A large tank should be used for breeding, as much as 100 gallons if possible. The Tiger Oscar will spawn in soft or hard water as long as it is clean and clear and has a temperature between 79-86°F. The female will lay from 1,000-2,000 eggs on rocks that have been carefully cleaned. The eggs are opaque at first, turning transparent in 24 hours. The brood will be carefully guarded and cared for and the fry will be kept in pits and may even be covered. When they are free-swimming, the fry should be fed Cyclops. Sometimes the fry will cling to their parents.

The Tiger Oscar is a carnivore that is a predaceous and hearty eater. Oscars will eat a variety of meaty foods, including small fish and earthworms, Cichlid pellets, larger flake food, ocean plankton, bloodworms, and tubifex worms.

Write a Testimonial | Ask Customer Service
Sharky G Buena Park , CA
I have three Tiger Oscars. One is 1 foot and two are 5 inches. They are very cool fish and very strong. I have my tank outside and they seem to be doing just fine. I love feeding them krill right from my hand.
D. D. Watkinsville , GA
Our Oscar is a part of the family. If you ignore him too much, he hits the light cover and makes you look at him. He has broken the heater and of course destroyed any semblance of order in the tank. He loves to play with a floating practice golf ball we put in his tank.
Tammy T Bristol , TN
When selecting this species you will need to have an excellent filtering system and large tank space for this fish becomes quite large. Once you decide to maintain a large tank with excellent filtering, you can enjoy "The Fish With A Personality". Red Tiger Oscars are Absolutely Amazing and are very aware of their surroundings!
Keith H Seattle , WA
I kept an Oscar in the past and it is a great fish to keep if you have the room. If you put rocks in the aquarium make sure they are large enough it won't be knocked around.. I had mine knock a few rocks hard enough it started a leak in a previous aquarium while he was about 8" in size.
They are actually a very smart fish and will respond to a specific person that they get use to seeing and I had mine to the point he would come up to be hand fed with pellet food, it's also handy to possibly keep a tank for breeding guppies to give them live treats once in awhile, and I had success using beef heart from the butcher shop as well.
Mike H Gallipolis Ferry , WV
I have a large Tiger Oscar (12-15 inches long) who is always hungry. He really likes worms and large bugs. He likes to mess up the aquarium by moving everything that he can move. Sometimes he even knocks the heater loose! He also pulls up plants. He usually doesn't bother the other fish unless they bite him, then he becomes very aggressive. He is a neat fish, but it is very difficult to maintain a nice-looking aquarium because he so enjoys messing it up.
Brian G Malta
I have 2 oscars. One is a tiger and the other a red albino. They are both hearty eaters and very docile in the aquarium. They like to eat meat but I stick mostly to their dry pellets since the former messes up the aquarium. Recently I made the mistake of introducing a new cichlid, guess what they ate the poor thing.
Dave R Nolanville , TX
I have raised two Tiger Oscars, each lived to be about five years old. The first time I didn't realize what I had gotten myself into. Five years, 15 inches and 2 1/2 pounds later, I cried when he passed. Personality is an understatement - Bruiser was one of my children.
John D Sonora , CA
When I got my Oscar, Barney, he was already 12 inches. He grew and grew. I really enjoyed feeding him his Cichlid Staple pellets. I'd throw them in one at a time and he would swallow it up. Very methodical fish. Always seemed to be planning to escape! An awesome fish to keep. Required some extra water changes but he was worth it. Barney lived more than 10 years. He was the family's bud and even got to the point of taking live minnows from my fingers. I HIGHLY recommend forming a relationship with an Oscar. They are a lot of fun.
Shane L Oakland , MD
I bought a Tiger Oscar 4 years ago and once acclimated, it instantly became part of the aquarium family. He is still alive today and almost 12" long. I wouldn't purchase fish from any other place.
Ben J San Francisco , CA
I have a Tiger Oscar named Major that's only 5 inches and looking great. He's always sliding along the glass waiting for food even if he's already had a huge meal. I love to feed him a varied diet, while still keeping him healthy. I would definitely recommend this fish to a person with a big enough tank. He hasn't started knocking anything over but I know that day will come!
Fishy Bill F Falmouth , MA
Oscars are the "dogs" of the freshwater aquariums.They have a very boistorus persanality and demand attention by following you up and down the glass. And I especially got a kick out of hand feeding the big bubbas.Oh yeah and if you plan on getting an oscar say goodbye to your neat little aquarium arrangement as they will dig up plants, put them on the other side, spit rocks at the glass. And usually do good with other cichlids if they grow up together.Great fish
Antonio N Hammond , IN
I really LOVE these fish!! They are very playfull and live for quite a while. I have two Oscars, one an Albino (3") and one a Tiger (4"). The best fish I have ever owned! Plus, they eat straight out of my hand. They won't let anyone else feed them. I have a 155 gallon tank for the both of them.
Dan C Syracuse , NY
I owned a pair of red oscars for 8 years. They are wonderful, intelligent fish, full of personality. They are generally not very aggressive. People mistakenly confuse eating smaller fish with aggression but they are two different things. Use caution when mixing them with similar-sized cichlids, the oscar will often be bullied.
1-13 of 13 testimonials