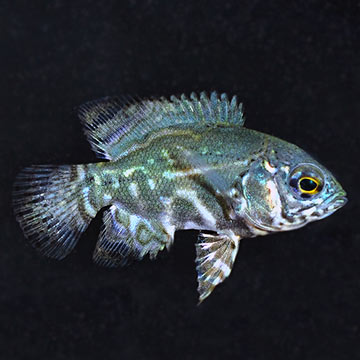 The Zebra Oscar is a color variation of Astronotus ocellatus Oscar. It is also known as the Marble Cichlid or the Velvet Cichlid and is a colorful addition to a large aquarium. The Zebra Oscar is black and white with gray shading and an eyespot on the dorsal fin. They will form a pair, make a nuclear family and are generally peaceful in nature. It is hard to tell the difference between the male and females, but during spawning the female has obvious genital papilla.

The Zebra Oscar requires a large aquarium of at least 70 gallons with a deep sand bottom and a few large rocks. They will dig up plants; so any that are in the tank should be potted with the root surfaces covered with rocks. Using floating plants is a good compromise to this problem. Tiny Oscars form a tight cluster for protection and this is normal behavior for juvenile fish. Large Oscars are not as territorial as most other cichlids when full grown but will consume anything they can fit into their mouths.

A large tank should be used for breeding, as much as 100 gallons if possible. The Zebra Oscar will spawn in soft or hard water as long as it is clean and clear and has a temperature between 79-86°F. The female will lay from 1,000-2,000 eggs on rocks that have been carefully cleaned. The eggs are opaque at first, turning transparent in 24 hours. The brood will be carefully guarded and cared for and the fry will be kept in pits and may even be covered. When they are free-swimming, the fry should be fed Cyclops. Sometimes the fry will cling to their parents.

The Zebra Oscar is a carnivore that is a predaceous and hearty eater. Oscars will eat a variety of meaty foods, including small fish and earthworms, Cichlid pellets, larger flake food, ocean plankton, bloodworms, and tubifex worms.

Write a Testimonial | Ask Customer Service
Jeff B Medford , OR
I got one in my group that has much better markings than the one in the pic. I believe this variety is also known as Wild-Type or Common Oscars. It's what the native oscars look like. Mine came quite small (around 1") still quite shy but eating very very well.
1-1 of 1 testimonials