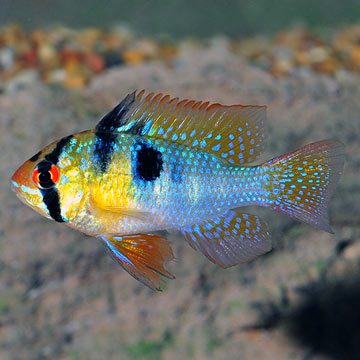 The Ram is prized for its winning personality despite its fierce appearance. With its spiked dorsal fin, low-slung pectoral fins, Mikrogeophagus ramirezi appears to be an aquarium bulldog. However, this member of the Cichlidae family is actually one of the more social and peaceful freshwater fish. In fact, most Rams will actively swim with equally non-aggressive members of your community aquarium and are known to faithfully pair with just one other mate. The German Blue Ram is known for its mottled deep blue splotches of color.

For the best care, the Ram should be kept in an aquarium of at least 20 gallons with several dense plant groups scattered around plenty of open swimming space. The Ram also needs a few caves in which to hide and, if breeding, flat stones on which the female can lay her eggs. Though the Ram is very peaceful, both females and males can become aggressive towards other fish when hiding places are lacking or when tending to their eggs.

Impeccable water quality is also a must. The Rams breed in soft to medium hard water with a neutral pH and slightly raised water temperatures between 77° and 82°F. Peat should be added to the water. Both the male and female share the rearing of the fry, and it has been reported that the Ram will take fry into their mouths to protect them like a mouth brooder. Care should be taken so that the fry are not sucked into the filter.

Write a Testimonial | Ask Customer Service
Mary G Blackwood , NJ
The German Blue Ram is a real beauty, with personality. They need soft water at a temperature of approx. 82 degrees. The rams live well with discus.
Chris H Cumberland , RI
These fish are awesome! So peaceful and calm. They never bother other fish. They add so much color to my tank, people always ask about them. They came in great condition and have only done better. I ordered two and they are so attached to one another; it is so adorable.
Adam C Marietta , GA
I have had a pair of these for a close to 2 years now, and they have spawned many times over. They do care for their young very well. Chasing down the fry that wander off, and taking them into their mouths and bringing them back to the bed - 'spitting' them back into the pack of fry. I read somewhere, and I have to say it's true (in my situation anyway) that they prefer to spawn on rocks that are more 'red' in color - like iron ore red. Not sure what they're looking for in them, but they never spawned anywhere else, even if I rearranged the tank, they'd go find that same rock. Very fun to watch them. Hours of entertainment for me. The most enjoyable fish I've ever had!
Toby W Phoenix , AZ
This is probably my favorite fish. I actually house one pair with 6 tiger barbs and they often school with the tiger barbs. They are friendly and have some personality. They often follow my finger and readily join in the feeding frenzy with the tiger barbs and gold barbs. I highly recommend them and if you are good about water changes don't worry about them being too hard to keep.
Davy J Rittman , OH
I just received 4 German Blue Rams, and I was so thrilled to see the quality of fish that you have. I will definitely be ordering fish through you again. Thank you so much. They are perfect!
1-5 of 5 testimonials