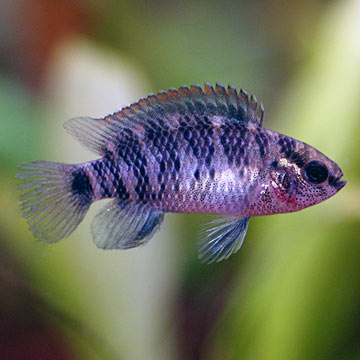 This fish will do well in an established planted aquarium with caves, rocks, and driftwood. The Badis is a territorial fish in a species tank, but is more peaceful in a community tank. Family groups are formed and are headed by the male.

Badis badis will breed in caves scattering the eggs which become attached to cave walls and the substrate. The male guards and defends the eggs, and, after about three days the fry hatch. The fry should be fed a diet of infusoria.

Carnivores, the Badis will consume live and frozen food, as well as freeze-dried bloodworms and tubifex, and small pieces of meat.

Write a Testimonial | Ask Customer Service
Art J Santa Clara , CA
The Badis is an extremely easy fish to keep. They are aggressive breeders. I have never seen them in a pet store sale tank without eggs and fry. It's amazing how much and how fast the male colors up while breeding.
Michael J Candia , NH
Ordered and received my Badis. They arrived in excellent condition and were not shy at all. They are doing well.
Zach S Edison , NJ
Received my two Badis, but at first, I couldn't find any live food to give them. Now, I'm giving them frozen brine shrimp, which they love to eat. Very dark in color, they make beautiful additions to my 20 gal tank. Be careful though, they only grow to 3 inches — mine are both 1 inch at the moment.
1-3 of 3 testimonials