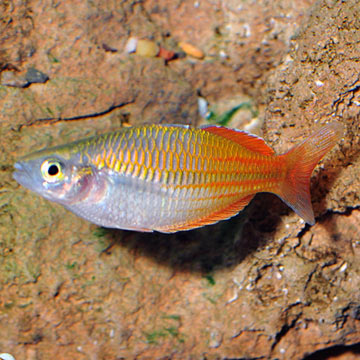 The Boesemani Rainbow creates a colorful centerpiece for any freshwater home aquarium. Males have a beautiful bluish purple head that fades into a gorgeous orange and yellow posterior. Though females are not as colorful, their brilliant silver coloration is equally as stunning against any backdrop of plants or rockwork. Regardless of sex, however, Melanotaenia boesemani boasts the same distinct characteristics as other Rainbowfish, including large eyes, a deeply forked mouth, and dual dorsal fins. Like many members of the Melanotaeniidae family, the Boesemani Rainbow also boasts the characteristic blackish-silver band of scales running laterally from gill to tail.

This peaceful Rainbow is a schooling fish that does best in a planted aquarium with plenty of room to swim. If a dark gravel substrate is used, the gravel may aid in intensifying the colors of the Boesemani Rainbow. When maintaining a school of Boesemani Rainbow, an aquarium that is at least 4 feet in length should be used.

An egg layer, Melanotaenia boesemani spawns on moss throughout the course of several days. The fry hatch after six or seven days and require small pieces of live food. We offer juveniles of this species, and they are too immature to differentiate between the sexes.

Although Boesemani Rainbows have large mouths, their throats tend to be narrow. Offer foods that are not too large. The Boesemani Rainbow is an omnivore and should be fed a mixed diet of prepared flakes, frozen, and live foods.

Write a Testimonial | Ask Customer Service
Brad C Minden , IA
I kept a pair of Boesemani's in a 20-gallon community tank. I found them to be incredibly hardy and brilliantly colored. They readily accepted flake food and got along well in my community tank. They did well on a diet of flakes, but also appreciated an occasional feeding of frozen brine shrimp and tubifex worms. Boesemani's Rainbow is a perfect occupant for a community tank of twenty or more gallons and will feed readily on almost anything. The ease of care combined with the beauty and intense coloring of Boesemani's Rainbows make them an extremely optimal fish to start with.
Karen F St. Cloud , FL
We have had rainbow fish of all types for the past ten years. They are extremely easy keepers. The Boesemani in our aquarium right now is six years old and doing well. Although he is the biggest "kid on the block", he doesn't hassle any other tank mates. I highly recommend rainbows, and especially the Boesemani for a colorful tank.
Scott P Buena Park , CA
Boesemani Rainbows are one of my favorites. For years, I have kept them in my community tropical aquarium of Tetras, Corys, Mollies, and others with little or no problems. I recommend these for the enthusiast with moderate fish keeping experience.
Holly W [City Not Selected] , CA
These are, indeed, beautiful and lively additions to a community tank. Some precaution should be taken with the choice of tankmates, however: Boesemanis are particularly fast and greedy eaters, and some slower moving species (such as gouramis) will find it difficult to compete for food. These rainbowfish love to eat bloodworms, and I have found that spirulina enhances their brilliant blues.
Judy D Lima , OH
I have four male Boesemani Rainbows - all real beauties! They need plenty of space to swim - and will be happiest with aquariums 4 feet wide so they can do their "dance to the sun" each morning. The photo shows a young male. As they mature, they will develop a proud chest and a slightly arched back. I like the unusual shape of the male rainbow fish. The females are more streamlined in shape and are not as vibrant in color. The females will be more brownish - although I did see one with almost as much color as the males (however, she was also quite aggressive and had been returned to a local fish store). My Boesemani rainbows are very peaceful and pair up to swim and show off their colors. My oldest one has lost two partners over the years and now swims with a handsome male Australian rainbow - so the other three have to take turns. The Australian won't let the other three near the the "king" of the rainbows (the four and half year old) - he acts as his private body guard. they are quite entertaining! These gems join 2 Millennium rainbows, three turquoise, two Kamaka, 2 Goyder River rainbows, the Austrailian - and a host of other fish in my 75 gallon aquarium. I keep them happy with a variety of food - with spirulina flakes served at every meal - must have their salad! They are indeed quite fond of bloodworms and other frozen treats. The frozen foods are also soaked in vitamins - keeping all of my fish happy and healthy.
Joshua S Denham Springs , LA
This was my first time buying fish online. Just got 4 of these little guys in. They took really well to the tank and are getting along with the other tropical community fish. Very fast shipping, and a great way to buy fish!
1-6 of 6 testimonials