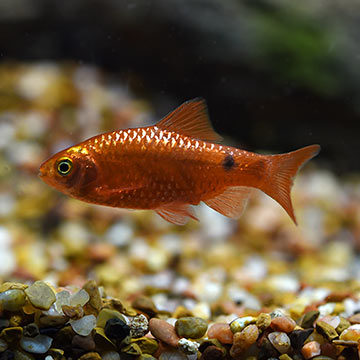 The Rosy Barb is one of the larger Barbs that can grow up to 6 inches in the wild. The male is red and gold with black spots near the rear and at the dorsal fin. The female lacks the red color and is mostly golden.

They prefer a well-planted tank of at least 30 gallons with soft, slightly acidic water. Rocks and driftwood can be added to the aquarium, but leave plenty of space for swimming. The Rosy Barb is a schooling fish and enjoys being in numbers. If in a large enough school, they typically will not bother any other fish in the aquarium.

It is best, when trying to breed the Rosy Barb, to house two females with one male. Provide a coarse gravel in the breeding tank and after the eggs have been laid, remove the parents. The fry will hatch in approximately 3 days, at which time, they should be fed baby brine shrimp until large enough to accept crushed flake food.

The Rosy Barb needs to be fed a variety of foods including vegetables as well as meaty foods. Feed a quality flake food as well as live and frozen foods such as brine shrimp and bloodworms.

Write a Testimonial | Ask Customer Service
Lisa O Larne , CO
I currently have a pair of rosy barbs in my 30 gallon tank they have been living there quite happily for nearly 3 years. They are very playful and boisterous, and will take food from my hand and nibble on me if I have my hand in the tank doing rearranging etc. They also come to the right hand side of the tank when they see any movement outside and beg for food, it is an amusing site, they are a great wee fish very entertaing to watch, and I would highly recommed them to any one. They are living with a bala shark more than twice their size but they are nearly always together, so cute.
1-1 of 1 testimonials